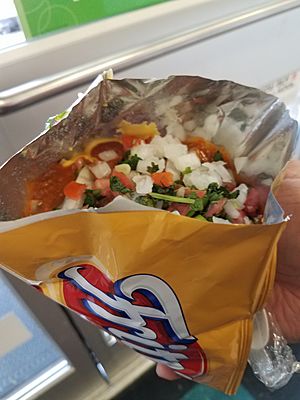 Frito pie is a dish popular in the Midwestern and Southwestern United States, whose basic ingredients are chili, cheese, and corn chips (traditionally Fritos). Additions can include salsa, refried beans, sour cream, onion, rice, or jalapeños. There are many variations and alternative names used by region. Frito pie can be prepared in a casserole dish, but an alternate preparation can be in a single-serve Fritos-type corn chip bag with various ingredients as toppings. In Mexico a similar type of dish is chilaquiles.

The exact origin of the frito pie is not completely clear. It is believed that it was created somewhere in Mexico and was popular at fiestas before it took off in other countries like the United States.

The oldest known recipe using Fritos brand corn chips with chili was published in Texas in 1949. The recipe may have been invented by Daisy Doolin, the mother of the founder of the Frito Corporation (Doolin) and the first person to use Fritos as an ingredient in cooking, or by Mary Livingston, Doolin's executive secretary. The Frito-Lay company attributes the recipe to Nell Morris, who joined Frito-Lay in the 1950s and helped develop an official cookbook which included the Frito pie.

Doolin and his Frito Corporation were early investors in Disneyland, which opened Casa de Fritos restaurant in Disneyland in 1955. "Frito Chili Pie" appears on the 1950s menu.

Another story claims that true Frito pie originated only in the 1960s with Teresa Hernández, who worked at the F. W. Woolworth's lunch counter in Santa Fe, New Mexico. Her Frito pie used homemade red chile con carne with cheddar cheese and onions, and was served in the bag, which was thicker in the 1960s than it is now.

Frito pie is a simple dish: At its most basic, it is just an amount of Fritos corn chips with beef chili as a topping. It was historically served by some right inside the chip bag, which is split down the middle; toppings typically include shredded cheese and chopped raw onion, and may also include additional items like sour cream and jalapeños.

Frito Pies are sometimes referred to by the name walking taco or Frito boat, and can be made in a small, single-serving bag of corn chips, with chili, taco meat, chickpeas, pork rinds, pepitas, and many other varied ingredients, poured over the top. The combination can be finished with grated cheese, onions, jalapeños, lettuce, and sour cream, known as a Frito boat or walking taco in the Midwestern United States. In the Ohio Valley region, this preparation is commonly called taco-in-a-bag. ("Walking taco" or "traveling taco", however, is the more widespread term at least in the Midwest). In many parts of Southern California, they are known as "pepper bellies." Frito pies are popular at sports venues, fundraisers, bingos, open houses, state fairs, and street vendors. The term Tostiloco comes from Tijuana, and is found in California. Another term is Doriloco, after Doritos.

In Mexico, a version of the dish is known as tostilocos ("crazy chips"). It is topped with cueritos, cucumber, jícama, lime juice, Valentina hot sauce, chamoy, Tajín chili powder, salt, and "Japanese peanuts".

All content from Kiddle encyclopedia articles (including the article images and facts) can be freely used under Attribution-ShareAlike license, unless stated otherwise. Cite this article:
Frito pie Facts for Kids. Kiddle Encyclopedia.