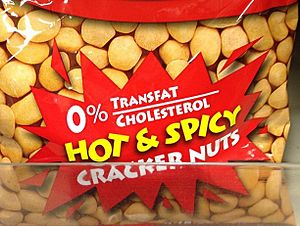 Cracker nuts, also known as Japanese peanuts or Japanese style peanuts are a snack food made from peanuts that are coated in a wheat flour dough and then fried or deep-fried. They come in a variety of different flavours. 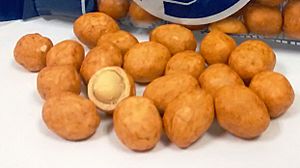 Cracker nuts are claimed to have originated in Mexico in the 1940s where a Japanese immigrant by the name of Yoshigei Nakatani invented “Japanese peanuts” (widely known in the Spanish-speaking world as cacahuetes japoneses or maní japonés).

The Mexican version’s recipe for the extra-crunchy shell has ingredients such as wheat flour, soy sauce, water, sugar, monosodium glutamate, and citric acid.

Picard Peanuts is a Canadian company that produces Chip Nuts, a snack food brand consisting of peanuts that have a potato chip coating. Various flavors of potato chips are used in the product's production.

All content from Kiddle encyclopedia articles (including the article images and facts) can be freely used under Attribution-ShareAlike license, unless stated otherwise. Cite this article:
Cracker nuts Facts for Kids. Kiddle Encyclopedia.