Kids Encyclopedia Facts
This page is about the condiment. For the French village, see Chamoy, Aube. 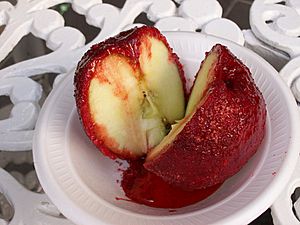 Chamoy is a variety of savory sauces and condiments in Mexican cuisine made from pickled fruit. Chamoy may range from a liquid to a paste consistency, and typically its flavor is salty, sweet, sour, and spiced with chiles.

The precise origins of chamoy are uncertain. The word "chamoy" may derive from the Cantonese word 西梅, see mui, in reference to crack seed, and some suspect Chinese migration in the nineteenth century brought it with them.

Another theory is it to be a Mexican adaptation of the Japanese umeboshi, or pickled ume fruit. In place of ume, the typical Mexican chamoy uses apricot, plum or mango as its fruit base. Teikichi Iwadare, a Japanese emigrant to Mexico, produced umeboshi made with apricot in the 1950s, which he called "chamoy". One author guess the word may have been derived from Wade–Giles: suan mei, or Vietnamese: xí muôi.

It may also be related to tsampoy [tl], a Filipino treat made of salted, sweet fruit.

Like umeboshi, Mexican chamoy is prepared by first packing the fruit in either dry salt or a brine. Occasionally, this brine is acidulated with vinegar. This draws out the natural moisture of the fruit by osmosis. When the fruit has been sufficiently dried, it is separated from the brine and is sold as a snack known as saladitos, literally 'little salty things.'

Meanwhile, the salted fruit brine created in this process is seasoned to taste with chile powder, becoming chamoy. This liquid may be further reduced, or thickened with pureed fruit, to achieve a variety of consistencies.

Because of differences in the type of fruit chosen and the composition of the brining solutions used, chamoy can vary widely in taste. Most are quite savory and spicy due to the addition of chile powder, and salty due to the brine. Depending on whether and how much vinegar was used, they may also vary from sour to sweet. 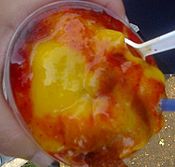 Chamoy is used to make chamoyadas.

Various versions of Mexican chamoy are sold under different brand names in Mexico and parts of the American southwest. The thinner, more liquid chamoy is typically bottled and marketed in a similar fashion to hot sauces. Because of the combination of salt, sweetness and heat, chamoy is advertised as a condiment for a wide variety of foods ranging from fresh fruit and juices to potato chips and assorted nuts. It is one of the more common ingredients for the street food known as "tostilocos".

Thicker chamoy with a pastier consistency are occasionally sold in small jars, appropriate to use as a dip for vegetables or firmer fruits. These jars often are sold alongside similar popular Mexican candies made from mango, tamarind, and watermelon; these candies are often prepared in the salado y enchilado style as well.

Chamoy is also used as a flavoring for frozen confections such as sorbet or raspados, a unique flavor combination that is at once sweet, salty, spicy, and cold. Raspados prepared in this style are often referred to as chamoyada. Paletas are also commonly offered in combination with chamoy. Favorite combination flavors in both raspados and paletas include pineapple, cucumber, lime, mango, orange, tangerine, tamarind and watermelon.

The popular Mexican beer mix michelada is sometimes made with chamoy instead of, or in addition to, the traditional assorted sauces used.

All content from Kiddle encyclopedia articles (including the article images and facts) can be freely used under Attribution-ShareAlike license, unless stated otherwise. Cite this article:
Chamoy Facts for Kids. Kiddle Encyclopedia.