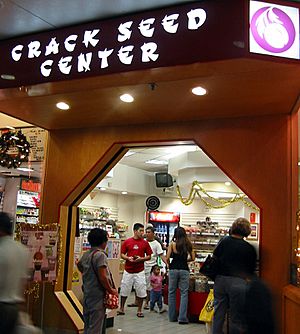 Crack seed is a category of snacks that originated in China. It is highly popular in many regions, such as Hawaii. Crack seed are preserved fruits that have been cracked or split with the seed or kernel partially exposed as a flavor enhancement. This type of snack is commonly referred to in Chinese language as see mui (西梅;) (or see moi in Hawaii); it arrived in Hawaii during the 19th century, when Cantonese immigrants were brought to work on the plantations. The larger numbers of Japanese who later came to work on the plantations adopted the snack, being similar to the Japanese umeboshi.

The flavors are varied, ranging from extremely sweet and salty to sour flavors. Flavors can include rock salt plum, honey mango, licorice peach, or any kind of combination of fruits, flavors and type of preservatives used. What originally was a preserved fruit has become a favorite snack in Hawaii and a sample of a cultural food.

All content from Kiddle encyclopedia articles (including the article images and facts) can be freely used under Attribution-ShareAlike license, unless stated otherwise. Cite this article:
Crack seed Facts for Kids. Kiddle Encyclopedia.