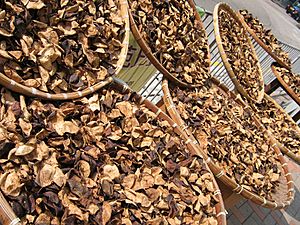 Chenpi drying in the sun

Chenpi or, also called chen pi, is sun-dried tangerine peel used as a traditional seasoning in Chinese cooking and traditional medicine. They have a bitter taste.

Xinhui chenpi is famous for its special production technique, where emphasis is put on peeling and storage methods. People can also do it at home.

Prior to consumption, chenpi is soaked and rinsed with cold water until it becomes soft; the soaking time is recommended to be no longer than half an hour with a view to retain its flavour. Afterwards, the white pith is gently scraped off from the softened peel. 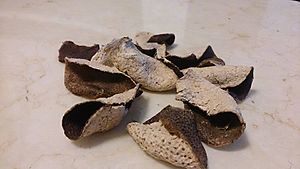 Some tong sui desserts such as red bean soup will use this ingredient occasionally. Chenpi is used to make the Hunanese dish orange chicken. It can be also utilised for other kinds of food and beverage such as porridge, duck and pigeon, mooncakes, green bean soup, jam and wine. Drinking chenpi infused tea is beneficial to sore throat and helps with poor appetite and digestive problems.

Chenpi is a common ingredient in traditional Chinese medicine, where they are used in regulation of ch'i (or qi), fortification of the Spleen, elimination of dampness, treating abdominal distension, to enhance digestion, and to reduce phlegm. It solves digestion problem by relieving intestinal gas and bloating. Chenpi can improve problems of pain, poor appetite, vomiting and hiccups. Its alcohol extracts relieve cough with copious sputum.

All content from Kiddle encyclopedia articles (including the article images and facts) can be freely used under Attribution-ShareAlike license, unless stated otherwise. Cite this article:
Chenpi Facts for Kids. Kiddle Encyclopedia.