Hatch is a village in Doña Ana County, New Mexico, United States. The population was 1,648 at the 2010 census. The town is experiencing moderate growth, along with its outliers of Salem, Arrey, Derry, and Rincon. Hatch is widely known as the "Chile Capital of the World," for growing a wide variety of peppers, especially the New Mexican cuisine staple, and one of New Mexico's state vegetables, the New Mexico chile.

Hatch was originally settled as Santa Barbara in 1851, however Apache raids drove the farmers away until 1853 when the nearby Fort Thorn was established. When Fort Thorn closed in 1859, the town was abandoned again in 1860. It was not until 1875 that it was re-occupied and at that time it was renamed for Indian fighter Edward Hatch, who was then commander of the New Mexico Military District.

According to the United States Census Bureau, the village has a total area of 3.1 square miles (8.0 km2), all of it land.

It is part of the Las Cruces Metropolitan Statistical Area. 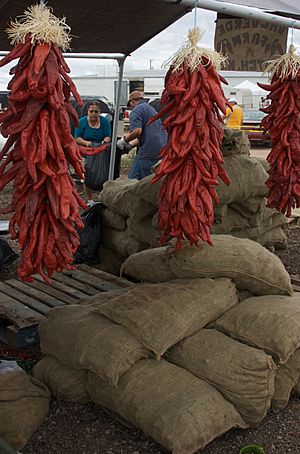 Ristras and sacks of chiles at the annual Hatch Chile Festival,
August 2008

The Hatch Chile Festival is an annual event that occurs each Labor Day. This event attracts people worldwide to a place known as the chile capital of the world. The small town has accommodated up to 30,000 people for this event. This small farming community is known worldwide for raising renowned chiles. By 2012, Hatch chiles were being marketed under their name in most major urban markets in the US. Other crops such as onions, cotton, and corn are also raised there. Irrigation of local farms is accomplished by wells pumping ground water along with surface water irrigation ditches. These divert water from the Rio Grande and two lakes approximately 20 mi (32 km) north of Hatch named Caballo (Spanish for "horse") and Elephant Butte Reservoir (named after a rock formation in the middle of the lake that looks similar to an elephant).

Hatch is 40 mi (64 km) northwest of Las Cruces, New Mexico, on Interstate 25, and 34 mi (55 km) south of Spaceport America, a new purpose-built spaceport being built by the New Mexico Spaceport Authority (NMSA) with state and county funding. In 2012, the NMSA announced it would be building a spaceport visitor's center in Hatch.

All content from Kiddle encyclopedia articles (including the article images and facts) can be freely used under Attribution-ShareAlike license, unless stated otherwise. Cite this article:
Hatch, New Mexico Facts for Kids. Kiddle Encyclopedia.