The county is named for Doña Ana Robledo, who died there in 1680 while fleeing the Pueblo Revolt. Doña Ana County is one of only two counties in the United States to have a diacritical mark in its name, the other being Coös County, New Hampshire. Notably, both Doña Ana County and Coös County lie on short international borders, the former with Mexico and the latter with Canada.

The state of Chihuahua, Mexico borders the county to the south. Construction of an improved barrier on the border was expedited in 2019 with waivers of environmental and other laws. The waivers are for 27 laws including protection of endangered species, archaeological sites, and historic places.

The county contains a number of prominent geographical features, most notably the Mesilla Valley (the flood plain of the Rio Grande) going north to south through the center and the Organ Mountains along the county's eastern edge. Other mountain ranges in the county are the Robledo Mountains, Doña Ana Mountains, Sierra de las Uvas, the southern end of the San Andres Mountains, East Potrillo Mountains, and West Potrillo Mountains, as well as two small, isolated mountains, Tortugas (or A) Mountain on the east and Picacho Peak on the west side of Las Cruces. The county also includes one of New Mexico's four large lava fields, the Aden Malpais, and one of the world's largest maare volcanoes, Kilbourne Hole. 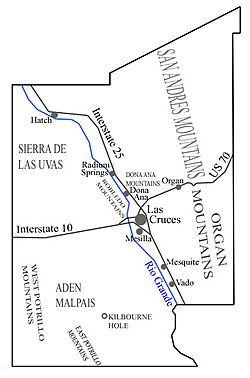 All content from Kiddle encyclopedia articles (including the article images and facts) can be freely used under Attribution-ShareAlike license, unless stated otherwise. Cite this article:
Doña Ana County, New Mexico Facts for Kids. Kiddle Encyclopedia.