The Organ Mountains (also known as La Sierra de los Órganos) are a rugged mountain range in southern New Mexico in the Southwestern United States. Organ Mountains–Desert Peaks National Monument was declared a national monument on May 21, 2014. They lie 10 miles (16 km) east of the city of Las Cruces, in Doña Ana County.

The Organ Mountains are near the southern end of a long line of mountains on the east side of the Rio Grande's rift valley. The range is nearly contiguous with the San Andres Mountains to the north and the Franklin Mountains to the south, but is very different geologically. Whereas the San Andres and Franklin Mountains are both formed from west-dipping fault blocks of mostly sedimentary strata (with limestone most prominent), the Organ Mountains are made primarily of igneous rock (intrusive granite and extrusive rhyolite). Their name reflects their similarity in appearance (particularly the granite "needles" in the highest part of the range) with pipes that would be part of a pipe organ. 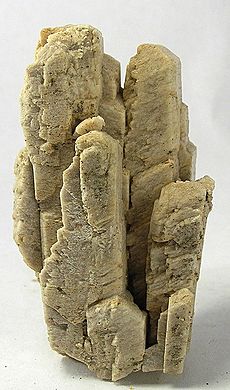 Orthoclase specimen from the Organ Mountains

The Organ Mountains are made up of three major sections: 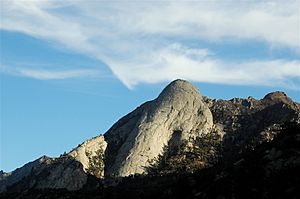 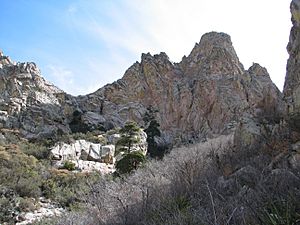 The range also has a high diversity in ferns, with 30 of the 56 species reported for New Mexico occurring within it.

The flora differs greatly between the three sections of the mountain range, with the two igneous sections (The Needles and the central extrusive portion) sharing relatively few species with the southern limestone portions. The limestone section includes some of the northernmost populations of lechuguilla (Agave lecheguilla), often considered an indicator species of the Chihuahuan Desert, whereas the igneous sections of the range include all of the endemic taxa and have botanical affinity with Madrean flora typical of the southwestern sky islands.

The protected lands surrounding the National Monument are threatened by the expansion of nearby settlements, energy development and mining, invasive species, and growing aridity due to climate change. 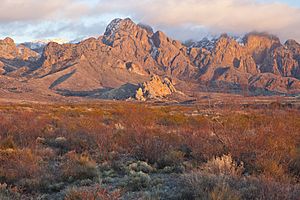 Winter snowfall in the Organ Mountains

The first documented climbs of Organ Mountain peaks were in the early 1890s, but most were done in the mid-1950s by climbers stationed at nearby Fort Bliss Army Base. The most prominent of these was R.L Ingraham, whose Guide to Climbing in the Organ Mountains remains a definitive reference.

The Bureau of Land Management maintains hiking trails accessed from four sites in the Organ Mountains:

The southern limestone section is difficult to access and rarely visited. Bishop's Cap can be reached through rugged dirt roads, but has no developed trails. Rattlesnake Ridge is entirely within Fort Bliss and closed to the general public.

President Obama designated the Organ Mountains–Desert Peaks a national monument by executive authority on Wednesday, May 21, 2014. White House press secretary Jay Carney stated that "By establishing the monument, the president will permanently protect more than 496,000 acres to preserve the prehistoric, historic and scientific values of the area for the benefit of all Americans."

All content from Kiddle encyclopedia articles (including the article images and facts) can be freely used under Attribution-ShareAlike license, unless stated otherwise. Cite this article:
Organ Mountains Facts for Kids. Kiddle Encyclopedia.