Mesilla (also known as La Mesilla and Old Mesilla) is a town in Doña Ana County, New Mexico, United States. The population was 2,196 at the 2010 census. It is part of the Las Cruces Metropolitan Statistical Area.

During the American Civil War, Mesilla briefly served as capital of the Confederate Territory of Arizona.

The Mesilla Plaza is a National Historic Landmark. 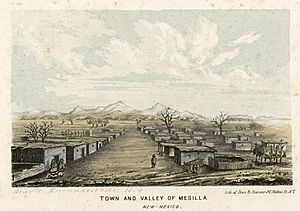 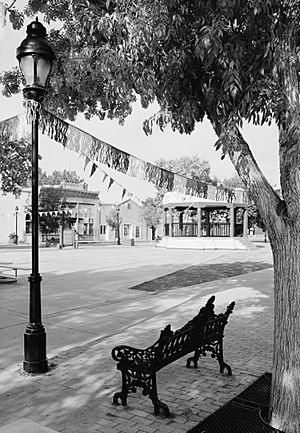 By 1850, Mesilla was an established colony. By this time, its people were under constant threat of attack from the Apache. By 1851, the attacks caused the United States to take action to protect its people just to the north of the border, in the Mesilla Valley. They did this by creating Fort Fillmore. As a result of the fort, the United States declared the Mesilla Valley region part of the United States. Mexico also claimed this strip of land, causing it to become known as "No Mans Land". This boundary dispute, which was officially caused by a map error, was resolved in 1853 with the Gadsden Purchase. Mesilla became a part of the United States, as well as the southern part of New Mexico and Arizona.

Two battles were fought at or in the town during the Civil War. Mesilla served as the capital of the Confederate Territory of Arizona in 1861-1862 and was known as the "hub", or main city for the entire region. Recaptured by the Volunteers of the California Column, it then became the headquarters of the Military District of Arizona until 1864.

During the "Wild West" era, Mesilla was known for its cantinas and festivals. The area attracted such figures as Billy the Kid, Pat Garrett and Pancho Villa. The village was also the crossroads of two major stagecoach lines, Butterfield Stagecoach and the Santa Fe Trail. The village of Mesilla was the most important city of the region until 1881.

In 1881, the Santa Fe Railway was ready to build through the Gadsden Purchase region of the country. Mesilla was naturally seen as the city the railroad would run through. However, the people of Mesilla asked for too much money for the land rights, and a landowner in nearby Las Cruces, a much smaller village than Mesilla, stepped in and offered free land. The city of Mesilla has not grown much since, and Las Cruces has grown to a population of an estimated 101,000 people (2014) and is currently the second largest city in New Mexico.

The Fountain Theatre, except for 12 years, has been in operation since the early 1900s.

In 2008, the Roman Catholic parish church of San Albino was raised to the status of minor basilica by the Holy See.

The gazebo in the center of the plaza was torn down and rebuilt due to unnoticed structural problems that made the gazebo unsafe. Demolition started in October 2013, ending in May 2014 for the annual "Cinco de Mayo" celebration. 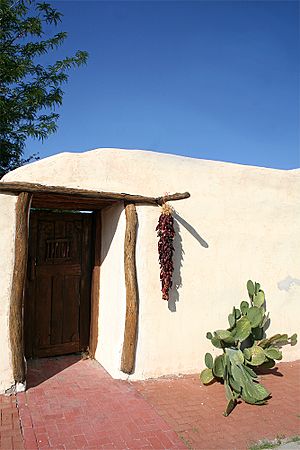 There were 892 households out of which 25.6% had children under the age of 18 living with them, 53.5% were married couples living together, 9.3% had a female householder with no husband present, and 33.2% were non-families. 27.8% of all households were made up of individuals and 8.9% had someone living alone who was 65 years of age or older. The average household size was 2.44 and the average family size was 2.99.

All content from Kiddle encyclopedia articles (including the article images and facts) can be freely used under Attribution-ShareAlike license, unless stated otherwise. Cite this article:
Mesilla, New Mexico Facts for Kids. Kiddle Encyclopedia.