Truth or Consequences (often abbreviated as T or C) is a city in New Mexico, and the county seat of Sierra County. In 2010, the population was 6,475. It has frequently been noted on lists of unusual place names for having chosen to rename itself in March 1950 after the Truth or Consequences radio show. The name is often hyphenated (Truth-or-Consequences, T-or-C) for clarity, though the formal name contains no punctuation. The town was formerly called Hot Springs, New Mexico.

The first bath in the area was built at "John Cross Ranch" over Geronimo Springs in the late 1800s. However, major settlement did not begin until the construction of Elephant Butte Dam and Reservoir in 1912; the dam was completed in 1916. Elephant Butte Dam was a part of the Rio Grande Project, an early large-scale irrigation effort authorized under the Reclamation Act of 1902. In 1916, the town was incorporated as Hot Springs. It became the Sierra County seat in 1937.

Originally named Hot Springs, the city changed its name to "Truth or Consequences", the title of a popular NBC Radio program. In March 1950, Ralph Edwards, the host of the radio quiz show Truth or Consequences, announced that he would air the program on its 10th anniversary from the first town that renamed itself after the show; Hot Springs won the honor, officially changing its name on March 31, 1950 (the program broadcast from there the following evening, April 1st). Edwards visited the town during the first weekend of May for the next 50 years. This event was called "Fiesta" and included a beauty contest, a parade, and a stage show. The city still celebrates Fiesta each year during the first weekend of May. The parade generally features area celebrities such as the Hatch Chile Queen. Fiesta also features a dance in Ralph Edwards Park.

The city is located on the Rio Grande, near Elephant Butte Reservoir. The city is served by the Truth or Consequences Municipal Airport, Interstate 25, I-25 Business, New Mexico State Road 51 (NM 51), NM 181 and NM 187

Truth or Consequences has a cool desert climate (Köppen BWk) with three main seasons. The summer season from April to June is very dry and generally hot with large diurnal temperature variation, giving way in July to the monsoon season which remains very hot – and is more uncomfortable due to the hotter nights – but is much more humid and rainfall from thunderstorms is frequent. The winter season from October to March has pleasantly mild and sunny days and cold to very cold nights, with very occasional rainfall from extratropical cyclones.

Precipitation is generally scarce apart from monsoonal storms. The wettest month on record has been July 2010 with 6.66 inches or 169.2 millimetres, but totals above 4.00 inches or 101.6 millimetres are confined to the monsoon season apart from an anomaly on December 1991 when three major subtropical cyclones brought 4.94 inches (125.5 mm). 1991 was also the wettest full calendar year with 17.04 inches or 432.8 millimetres. Snowfall is extremely rare, with a median of zero and mean of 5.0 inches or 0.13 metres; the heaviest snow known in Truth or Consequences is the 17.9 inches or 0.45 metres that fell during the record cold spell of Christmas 1987.

The New Mexico Department of Energy, Minerals, and Natural Resources created two demonstration projects using geothermal energy in Truth or Consequences in the 1980s. The Carrie Tingley Hospital for children with physical disabilities, which has since moved to Albuquerque, used the state money to create a physical therapy program. The local Senior Citizen's Center benefits from a geothermal space heating system. 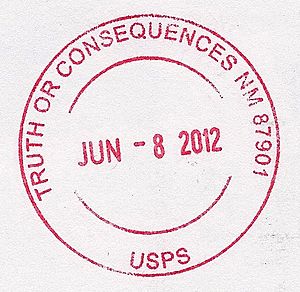 A postmark from Truth or Consequences

Truth or Consequences is a prominent location of major parts of the action in the 2015 episode "The Zygon Invasion" of the British TV series Doctor Who where the name of the town plays a role in the plot of the episode, although the scenes themselves were shot in Fuerteventura.

All content from Kiddle encyclopedia articles (including the article images and facts) can be freely used under Attribution-ShareAlike license, unless stated otherwise. Cite this article:
Truth or Consequences, New Mexico Facts for Kids. Kiddle Encyclopedia.