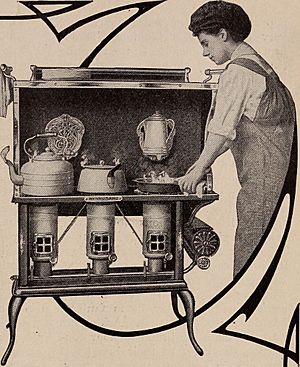 The Boston Cooking-School Cook Book (1896) by Fannie Farmer is a 19th-century general reference cookbook which is still available both in reprint and in updated form. It was particularly notable for a more rigorous approach to recipe writing than had been common up to that point.

In the preface Farmer states:

It is my wish that it may not only be looked upon as a compilation of tried and tested recipes, but that it may awaken an interest through its condensed scientific knowledge which will lead to deeper thought and broader study of what to eat.

Farmer's 1896 compilation became the best-selling cookbook of the era.

In 2007, that period of American culinary history was recreated in an elaborate dinner using the Victorian cooking methods outlined in this book. The extensive preparations and the ultimate results were described in a book entitled Fannie's Last Supper by Christopher Kimball; and an American public television program of the same name was broadcast in 2010.

When Little, Brown & Company was preparing the first edition of Fannie Farmer's cookbook, they were not confident it would sell well. As such, the first edition, released in 1896, had a limited run of only 3,000 copies. It proved an immediate success.

The twelfth and thirteenth editions were published by Knopf Publishing Group.

All content from Kiddle encyclopedia articles (including the article images and facts) can be freely used under Attribution-ShareAlike license, unless stated otherwise. Cite this article:
The Boston Cooking-School Cook Book Facts for Kids. Kiddle Encyclopedia.