Groton is a town in northwestern Middlesex County, Massachusetts, United States. The population was 10,873 at the 2012 town census. It is home to two prep schools: Groton School, founded in 1884, and Lawrence Academy at Groton, founded in 1792. The historic town was a battlefield in King Philip's War and Queen Anne's War, experienced incidents of insurrection during Shays's Rebellion, and was the birthplace of William Prescott, who commanded the colonial forces at the Battle of Bunker Hill.

The area surrounding modern day Groton has, for thousands of years, been the territory of various cultures of indigenous peoples. They settled along the rivers for fishing and transportation. Historic tribes were Algonquian-speaking Nipmuc and Nashaway Indians.

The Anglo-American Groton started with the trading post of John Tinker, who conducted business there with the Nashaway at the confluence of Nod Brook and the Nashua River. The Nashaway called the area Petapawag, meaning "swampy land." Other pioneers followed the Algonquian trails from Massachusetts Bay, as Tinker had. They found the region productive for fishing and farming.

The town was officially settled and incorporated in 1655, named for Groton in Suffolk, England. Called The Plantation of Groton, it included all of present-day Groton and Ayer, almost all of Pepperell and Shirley, large parts of Dunstable, Littleton, and Tyngsborough plus smaller parts of Harvard and Westford, as well as Nashua, New Hampshire and Hollis, New Hampshire.

During King Philip's War, on March 13, 1676, Indians burned all buildings except for four Groton garrisons. One of those killed was John Nutting, a Selectman at Groton. Survivors fled to Concord and other safe havens, but two years later returned to rebuild. Native Americans attacked the town again during the Raid on Groton in 1694 (King William's War).

In 1704 during Queen Anne's War, a French-Abenaki raid captured three Tarbell children among others, taking them to Kahnewake near Montreal for ransom, which was a thriving business between these opposing colonies. The two younger boys, John and Zachary, were adopted by Mohawk families and became fully assimilated, later marrying into the tribe and becoming chiefs. They were among the founders of Akwesasne, further upriver. Their sister Sarah was ransomed by a French family, converted to Catholicism and joined a Catholic order in Montreal. There are Tarbell-named descendants among Mohawk of Kahnewake in the 21st century.

In 1775, the common in front of the First Parish Church was an assembly area for Minutemen who fought in the Battle of Lexington and Concord.

According to the United States Census Bureau, Groton has a total area of 33.7 square miles (87.3 km²), of which 32.8 square miles (84.9 km²) is land and 0.9 square miles (2.4 km²) (2.79%) is water. Groton is the largest town in Middlesex County in terms of square mileage. The town is drained by the Nashua River and Squannacook River. The center of the town is dominated mainly by Gibbet Hill, with several other large hills throughout the town.

Groton is served by state routes 40, 111, 119 and 225. It borders the towns of Pepperell, Dunstable, Tyngsborough, Westford, Littleton, Ayer, Shirley and Townsend.

There were 3,268 households out of which 46.8% had children under the age of 18 living with them, 70.0% were married couples living together, 6.3% had a female householder with no husband present, and 21.4% were non-families. 17.1% of all households were made up of individuals and 5.4% had someone living alone who was 65 years of age or older. The average household size was 2.90 and the average family size was 3.31. 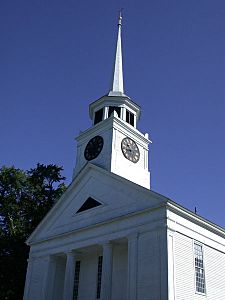 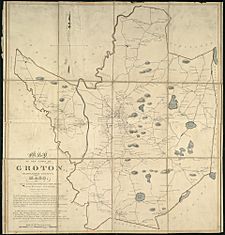 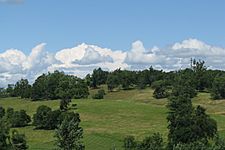 Over 30% of the land in Groton, Massachusetts is protected open space. The majority of this open space is accessible to the public. Groton also has over 100 miles of trails. Many of these trails can be walked and biked, others are availably for hunting and/or camping. The trails are made and maintained by the Groton Trail Committee and the land itself is mannaged by the Groton Conservation Trust.

All content from Kiddle encyclopedia articles (including the article images and facts) can be freely used under Attribution-ShareAlike license, unless stated otherwise. Cite this article:
Groton, Massachusetts Facts for Kids. Kiddle Encyclopedia.