Kids Encyclopedia Facts
This page is about the British marine. For the industrialist, see John Pitcairn, Jr..

Major John Pitcairn (28 December 1722 – 17 June 1775) was a British Marine officer who was stationed in Boston, Massachusetts, at the start of the American War of Independence.

Born in Scotland in 1722, Pitcairn joined the Naval Service at the age of 23 and was stationed in Canada during the French and Indian War serving as a captain of Marines. He arrived in Boston in 1774 and the next year was one of the leading officers of the Battles of Lexington and Concord, which marked the start of the American Revolution. Two months later in June, Pitcairn was killed in action during the Battle of Bunker Hill. Considered one of the most respected British officers by both his men and the colonists, he was buried at the Old North Church in Boston.

Pitcairn was born in 1722 in Dysart, a port town in Fife, Scotland. His parents were the Reverend David Pitcairn and Katherine (Hamilton) Pitcairn. An older brother, was William Pitcairn, who later became a botanist, doctor and president of the Royal College of Physicians.

John Pitcairn entered the Marines when he was twenty-three, was commissioned as a lieutenant in 1746, served in Canada during the French and Indian War as a captain, and was promoted to major in 1771. In 1774 he arrived in Boston, Massachusetts, in command of 600 Royal Marines assigned to support the British forces in the increasingly resistive colony. 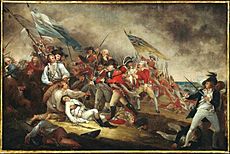 John Trumbull's The Death of General Warren at the Battle of Bunker Hill. At right center Pitcairn falls into the arms of his son

John Pitcairn was respected by the citizens in Boston as one of the more reasonable officers in the occupying force. He was in command of the advance party that marched on Lexington and Concord on 19 April 1775, which began the American War of Independence. His horse was shot from under him, and he lost a pair of matched pistols when the column's baggage was abandoned. Patriot leader Israel Putnam would carry them through the rest of the war.

At the Battle of Bunker Hill two months later, Major Pitcairn commanded a reserve force of about 300 Marines. They landed at the south end of the Charlestown peninsula. When the first assaults failed, Pitcairn led his men up the hill toward the American position. Although already being wounded by two gunshots, he led his men through the rebel trenches. When he entered the trenches, he was shot four times, including the final blow, which was a wound to the head, said to have been fired by a former slave named Peter Salem. He toppled into the arms of his son, Thomas, also a Marine officer, who cried out, "I have lost my father!" Some Marines tried to console the son, while others, overcome with emotion, openly wept. Pitcairn was carried back to Boston, where he died of his wound within hours. He is buried at the Old North Church in Boston. After the battle, all of the redcoats said they "had all lost a father".

John Trumbull's painting of the Battle of Bunker Hill depicts Pitcairn's death, though with several errors and anachronisms. Since no portrait of him is known to exist, Pitcairn's son David Pitcairn was used as a model by Trumbull. The uniform depicted in it was not actually adopted by the Marines until the 1780s. Pitcairn is shown falling at the crest at its capture from the American force, while he was actually shot starting to climb the hill. Major Pitcairn is also depicted at the painting of the Battle of Lexington in the U.S. Capitol rotunda.

John Pitcairn married Elizabeth Dalrymple (1724–1809), a daughter of Robert Dalrymple. Together they had four other sons and four daughters. One son, Robert Pitcairn, was a midshipman in the Royal Navy. On 3 July 1767 the 15-year-old boy, aboard the sloop HMS Swallow, was the first person to sight an unknown island in the south Pacific. The captain named the island Pitcairn's Island in the boy's honour. Later, in 1770, Robert Pitcairn was aboard an East India Company ship that vanished without trace en route to the Comoro Islands. Another daughter, Catherine Pitcairn, married Charles Cochrane, son of the 8th Earl of Dundonald and a first cousin of Admiral Thomas Cochrane, 10th Earl of Dundonald.

All content from Kiddle encyclopedia articles (including the article images and facts) can be freely used under Attribution-ShareAlike license, unless stated otherwise. Cite this article:
John Pitcairn Facts for Kids. Kiddle Encyclopedia.