Westford is a town in Middlesex County, Massachusetts, United States. The population was 21,951 at the 2010 census.

Originally a part of neighboring Chelmsford, West Chelmsford soon grew large enough to sustain its own governance, and was officially incorporated as Westford on September 23, 1729.

In the late 18th and early 19th centuries, Westford primarily produced granite, apples, and worsted yarn. The Abbot Worsted Company was said to be the first company in the nation to use camel hair for worsted yarns. Citizens from Westford also had some notable involvement in the Revolutionary War. Westford Minutemen were alerted by efforts of Samuel Prescott who alerted Acton, to the southeast towards Stow.

Paul Revere's son attended Westford Academy and a bell cast by Revere graces its lobby today. A weather vane made by Paul Revere sits atop the Abbot Elementary school.

By the end of the American Civil War, as roads and transportation improved, Westford began to serve as a residential suburb for the factories of Lowell, becoming one of the earliest notable examples of suburban sprawl. Throughout the 20th century (and with the invention of the automobile), Westford progressively grew, continuing to serve as residential housing for the industries of Lowell, and later, Boston.

In the 1960s, the town was home to one of the research sites supporting Project West Ford.

By the 1970s, with the advent of the 128 Technology Belt, Westford began to act as a suburb for high-tech firms in Burlington, Woburn, and other areas, and later became a center of technology itself.

By the 1990s, Westford was home to offices for Red Hat, Samsung, Sonus Networks, Seagate, Iris Associates, Visual Solutions, and many other technology firms, most located along Massachusetts Route 110, parallel to I-495. It is also the North American headquarters for Puma, which holds a road race in town. The leading manufacturer of EEG electrodes, HydroDot Inc., located here in 2007.

Westford's inter-town sports teams have the colors of maroon, white, and sometimes black. 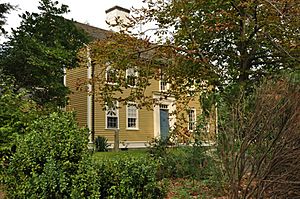 Regionally, it is on the edge of the Merrimack Valley, Northern Middlesex County, and the Metrowest regions of Massachusetts.

Colloquially, the town is divided into different regions based on location, including Forge Village, Nabnasset, Graniteville, Parker Village, and Center of Town. The town's Master Plan maintains a distinction between the Commercial and Residential zones of the town, divided by Route 495. This allows for growth in the town while maintaining the character of this lovely area, and a balance of open spaces, without encroachment of commercial development as you approach Westford's Historic Town Center.

Freight travels daily through Westford over the tracks of the historic Stony Brook Railroad. The line currently serves as a major corridor of Pan Am Railways' District 3 which connects New Hampshire and Maine with western Massachusetts, Vermont, and New York. Interstate 495 (Massachusetts) also passes through the town, linking it to other parts of the state as well as New Hampshire. US-3 passes through the town, although the nearest interchanges are located in neighboring Tyngsborough (exit 34) and Chelmsford (exit 33).

The LRTA 15 bus connects Westford along Route 110 with Chelmsford and the Lowell train station on the MBTA Commuter Rail Lowell Line. 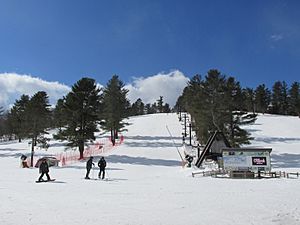 All content from Kiddle encyclopedia articles (including the article images and facts) can be freely used under Attribution-ShareAlike license, unless stated otherwise. Cite this article:
Westford, Massachusetts Facts for Kids. Kiddle Encyclopedia.