Littleton (historically Nipmuc: Nashoba) is a town in Middlesex County, Massachusetts, United States. The population was 8,924 at the 2010 census.

Littleton was first settled by white settlers in 1686 and was officially incorporated by act of the Massachusetts General Court on November 2, 1714.

The town was also the location of the sixth Praying Indian village established by John Eliot called Nashoba Plantation, on the land between Lake Nagog and Fort Pond. Daniel Gookin, in his Historical Collections of the Indians in New England, (1674) chapter vii. says:

Nashobah is the sixth praying Indian town. This village is situated, in a manner, in the centre, between Chelmsford, Lancaster, Groton and Concord. It lieth from Boston about twenty-five miles west north west. The inhabitants are about ten families, and consequently about fifty souls.

At the time of King Philip's War, the General Court ordered the Indians at Nashoba to be interned in Concord. A short while later, Concordians who were hostile to the Nashoba solicited some Militia to remove them to Deer Island. Around this time, fourteen armed men of Chelmsford went to the outlying camp at Wameset (near Forge Pond) and opened fire on the unsuspecting Nashoba, wounding five women and children and killing outright the only son of John Tahattawan, a boy twelve years old. For much of the war, Praying Indians were rounded up and sent to Deer Island. When increasing numbers of Massachusetts Bay officers began successfully using Praying Indians as scouts in the war, sentiment of the white settlers turned. In May, 1676, the Massachusetts General Court ordered that Praying Indians be removed from Deer Island. Still, many perished of starvation and disease. Upon their release, most survivors moved to Natick and sold their land to white settlers.

In his book, An Historical Sketch Town of Littleton (1890), Herbert Joseph Harwood wrote:

It is said that the name Littleton was given as a compliment to Hon. George Lyttleton, M.P., one of the commissioners of the treasury [one time Chancellor of the Exchequer], and that in acknowledgment he sent from England a church-bell as a present to the town but on account of the error in spelling by substituting "i " for "y," the present was withheld by the person having it in charge, who gave the excuse that no such town as Lyttleton could be found, and sold the bell."

The minutemen and militia of Littleton marched and fought at Concord and the Battle Road on April 19, 1775. The militia company and the minutemen squads mustered at Liberty Square located on the southwest side of town on the Boxborough line (then part of Littleton). They marched from there through what is now Boxborough Depot and over Littleton Rd/Boxborough Rd to Newtown Road (Littleton), up over Fort Pond Hill (stopping briefly at the Choate Farm) and along Newtown Rd (Acton) to Acton Center. From there they marched the Isaac Davis Trail to Old North Bridge. Some writing suggests that the minutemen sped ahead to join the other minutemen at the bridge.

The town, according to local lore, did have a contingent of Loyalists who remained in town after the revolution and thwarted attempts to rename King Street as Main, Washington, or Adams Streets. This has been the source of ribbing from neighboring towns calling Littleton a Tory town.

Author John Hanson Mitchell wrote a book titled Ceremonial Time which details a history of fifteen thousand years over one square mile located within the town. 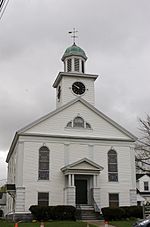 History of the First Baptist Church

Despite the influx of Roman Catholic immigrants from Ireland, Canada, and Italy into Middlesex County, Littleton remained a predominantly Yankee town with the bulk of the population belonging to the Congregational Church of Littleton, The First Baptist Church, and First Church Unitarian churches. The Roman Catholic parish of St. Anne's was established in 1947 followed by The Church of Jesus Christ of Latter-day Saints in 1979. In 1956 the Church of Christ on Harwood Ave. was built, but disbanded in 1985 due to the closing of Ft. Devens and resultant dwindling membership.

The arrival of Digital Equipment Corporation (DEC, now part of Hewlett-Packard) in the 1970s made the town part of the Boston-area high-tech corridor. Digital built a very large facility on King Street near the Common, as well as offices on Porter Road and Foster Street. In 2007, IBM purchased the King Street facility from Hewlett-Packard and announced it would become its main New England location.

Due to the Yankee character of the town, it was notedly dry during Prohibition and the Rowse family, which then owned New England Apple Products (later Veryfine), were known for their integrity and honesty characterized by their refusal to do business with bootleggers in a state where Prohibition was overwhelmingly unpopular. Alcohol was first allowed to be sold in Littleton in 1960 in two locations, the Johnson's store at the Depot and the Nashoba Package store at Donelan's shopping center. Only in the late 1980s with the building of DEC's King Street facility was a bar allowed to open in town (later Ken's American Cafe, which closed in December 2008, and followed by what is now the Chip Shot on Ayer Road). For years there were establishments that served alcohol just over the town line in Acton, Westford, Groton, Ayer, and Boxborough.

Many of the early settling families have remained in the town to present day: Blanchard, Bulkeley, Crane, Hartwell, Hathaway, Kimball, and Whitcomb. The neighborhoods around Mill Pond (also known as Lake Warren), Long Lake, Forge Village, and Spectacle Pond include numerous summer cottages or "camps" that have been converted into year-round residences. Many of the Irish, Italian, Québécois, and Finnish families ended up moving to Littleton in the 1950s and 1960s after coming out from their neighborhoods in Arlington, East Boston, Cambridge, Lowell, and Somerville.

Due to its location between Fort Devens and Hanscom AFB, Littleton became a popular location for military retirees from the 1960s to the present day.

Residential development in the postwar years

Residential development occurred in the postwar years in several spurts. In the late 1940s to 1950, cottages around Long Lake off Goldsmith, on the Littleton side of Forge Pond (called Lake Mattawanakee), along Spectacle Pond, and beside Mill Pond off Harwood Ave were either winterized or torn down and replaced by bungalows and Capes.

At the same time, new construction went up along New Estate Road, Whitcomb Ave, and Tahattawan Road. From 1955 through 1965, Snow Village (off Great Road about a quarter mile before Power Road—formerly Snake Hill Road), Edsel Road (Kimball land behind the current Post Office running up the hill on the right of Goldmith Street), and lower Hartwell Ave (in the subdivision abutted by the cemetery, King St, and Hartwell Ave) were built with ranch houses and larger Capes.

In the late 1970s and early 1980s, the farms between Hartwell Ave and Great Road were developed along with upper Hartwell Ave. In this period, the livery stable at the corner of Coughlin Road and Newtown Road sold off more than half of its land to developers.

In the late 1980s and early 1990s, the horse farms along Russell Street off Great Road closed and were developed as well as some of the horse farms off Harwood by the quarantine station. The start of the 21st century has seen further building of quite large Colonials along Great Road, on Fort Pond Hill, and along Beaver Brook Road.

There were 2,960 households of which 37.8% had children under the age of 18 living with them, 64.6% were married couples living together, 7.7% had a female householder with no husband present, and 25.1% were non-families. 19.6% of all households were made up of individuals and 8.2% had someone living alone who was 65 years of age or older. The average household size was 2.72 and the average family size was 3.16. 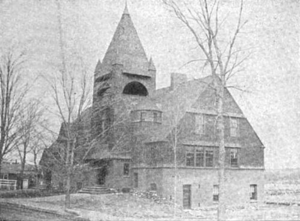 Freight travels daily through Littleton over the tracks of the historic Stony Brook Railroad. The line currently serves as a major corridor of Pan Am Railway's District 3 which connects New Hampshire and Maine with western Massachusetts, Vermont, and New York.

All content from Kiddle encyclopedia articles (including the article images and facts) can be freely used under Attribution-ShareAlike license, unless stated otherwise. Cite this article:
Littleton, Massachusetts Facts for Kids. Kiddle Encyclopedia.