Acton is a suburban town in Middlesex County, Massachusetts, United States, approximately twenty-one miles west-northwest of Boston along Route 2 west of Concord and about ten miles (18 km) southwest of Lowell. The population was 21,929 at the 2010 census and ranked 35th on the list of highest-income places with a population of at least 10,000. It is bordered by Westford and Littleton to the north, Concord and Carlisle to the east, Stow, Maynard, and Sudbury to the south and Boxborough to the west. Acton became an incorporated town in 1735. The town employs the Open Town Meeting form of government with a Town Manager and an elected, five-member Board of Selectmen. Acton was named the 11th Best Place To Live among small towns in the country by Money Magazine in 2015, and the 16th best in 2009 and in 2011. The local high school, Acton-Boxborough Regional High School, was named a Blue Ribbon School by the U.S. Department of Education in 2009. In 2012, U.S. News & World Report ranked Acton-Boxborough #3 among open enrollment high schools and #7 overall for STEM education in the United States.[6] 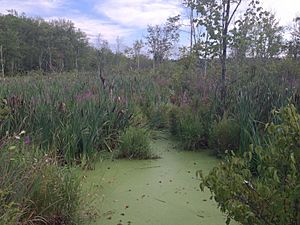 The current geography of Acton was created when the last wave of glaciers retreated approximately ten thousand years ago. Acton has nine drumlins — hills which are composed of glacial till. In addition, Wills Hole and Grassy Pond are kettle ponds which were formed in depressions in the till formed by large blocks of ice.

Acton has two primary stream systems: the Nashoba Brook system including the incoming streams Butter Brook, Will's Hole Brook and Conant Brook and the Fort Pond Brook system including the incoming streams Guggins Brook, Inch Brook, Grassy Pond Brook, Pratt's Brook and Coles Brook. Both stream systems empty into the Assabet River, which passes briefly through the town at its southern corner. Nagog Pond in the north, forms Acton's border with the Town of Littleton and provides drinking water to the Town of Concord. A small artificial pond is at NARA Park in North Acton.

While Acton Center has been the civic center of the town since the revolution, the four other villages centers earned their nomenclature from the names of their corresponding railroad station.

The current Master Plan for the town encourages development in the village centers in an attempt to prevent further sprawl and preserve open space in the rest of the town.

See also: History of the Chinese in Boston

Acton had 2,041 Chinese Americans in 2010, a 151% increase from 2000 and the ninth largest Chinese population in Massachusetts.

Data is from the 2009-2013 American Community Survey 5-Year Estimates.

Acton's history reflects the history of Massachusetts, New England, and the United States.

Acton was first settled by Native Americans who used the Assabet, Sudbury and Concord rivers for transportation and the fields for farming seasonal crops. There is evidence of Native American settlements in Acton which go back 7000 years. When the colonists arrived in this area, the Native American population dropped dramatically due to European diseases for which they had no immunity. 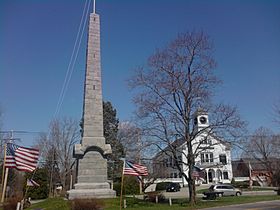 Concord was the first in-land colonial town established in the MA Bay Colony. The original boundaries of Concord included all of Acton and residents used the Acton land as grazing fields for their animals. In 1639, the first homestead was built within the modern day boundaries of the town..

Acton was established as an independent town on July 3, 1735. Acton has held annual town meetings since 1735, the records of which are held at Acton's Memorial Library.

Acton residents participated in the growing hostility with Great Britain by sending a list of grievances to King George III on Oct. 3rd, 1774. The anniversary of this day is celebrated in Acton as Crown Resistance Day.

At the beginning of the Revolutionary War, on April 19, 1775, a company of minutemen from Acton responded to the call to arms initiated by Paul Revere (who rode with other riders, William Dawes and Samuel Prescott, with Prescott the only one of the three who was able reach Acton itself) and fought at the North Bridge in Concord as part of the Battle of Lexington and Concord. The Acton minutemen were led by Captain Isaac Davis. When a company was needed to lead the advance on the bridge which was defended by the British regulars, Captain Davis was heard to reply, "I haven't a man who is afraid to go." The Acton men led because, unlike other militias there, they were fully equipped with bayonets.

The colonists advanced on the bridge; in the exchange of musket fire that followed, Captain Isaac Davis and Private Abner Hosmer of Acton were killed. Davis was the first officer to die in the American Revolutionary War. In Acton they refer to "the battle of Lexington, fought in Concord, by men of Acton."

During the 19th century, Acton participated in the growing Industrial Revolution. By the mid-19th century, Acton was an industrial center for the production of barrels (cooperage). There were also a powder mill, three gristmills and four sawmills in town. The American Powder Mills complex extended downstream along the Assabet River and manufactured gunpowder from 1835 to 1940.

On October 1, 1844 the railroad came to Acton. The Fitchburg Railroad was routed through South and West Acton so that it could serve the mills. South Acton became a busy rail center and was the division point for the Marlborough Branch Railroad. With the railroad came increasing development in those areas. In addition to the Fitchburg Railroad, two others crossed the town: the Nashua and Acton, and the Framingham and Lowell. These two railroads shared a double track right-of-way that ran from West Concord (aka Concord Junction) through East Acton and then splitting in North Acton in the vicinity of Route 27 and Ledgerock Way.

In 1874, the population of the town was almost 1700. The town established its first newspaper, The Acton Patriot, and the residents of West Acton formed the first library, The Citizen's Library. In 1890, the Memorial Library was completed and given to the town by William A. Wilde as a memorial to the Acton soldiers who fought in the Civil War.

Acton has a total of over 1,650 acres (7 km2) of town-owned conservation lands. http://www.actontrails.org

These town conservation areas, and some smaller ones, are described and mapped in a website maintained by the town's volunteer Land Stewardship Committee. 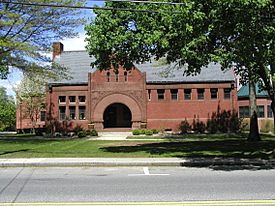 The Acton Memorial Library was given to the town of Acton by William Allan Wilde as a memorial to its Civil War veterans in 1890. The building was expanded in 1967, and a second major expansion was completed in 1999.

There are also libraries in each of the elementary schools, the Junior High, and the High School.

Though there are several theater groups in Acton, the two eldest are Theatre III and Open Door Theater. The multi award-winning Theatre III was founded in 1956 when three organizations (a local chorus, dance group, and dramatic troupe) combined to present a show. It produces several plays and musicals each season in the historical old church building on Central Street.

Open Door Theater is a community theater group which was founded to provide an inclusive theater experience. Open Door produces one large musical each year which features a large number of performers ranging in age from 9 to adult including people with special needs. They perform and rehearse in the Dragonfly Theatre, located inside the R. J. Grey Junior High School. 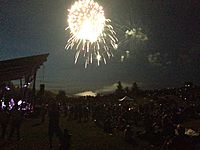 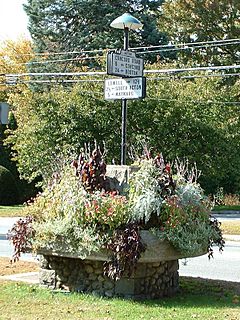 Antique road sign in a well near Acton Center, along Route 27

The MBTA Commuter Rail Fitchburg Line train stops at the South Acton station. South Acton is a major station on the line at which many trains terminate. Besides the urban stops at Cambridge (Porter Square) and Boston (North Station Terminal), it is the only station on the line at which all trains stop. The MBTA Fitchburg Line provides service to Fitchburg, Leominster, Shirley, Ayer, Littleton, Concord, Lincoln, Weston, Waltham, Belmont, Cambridge, and Boston.

Yankee Lines provides a commuter bus service to Copley Square in Boston from the intersection of Route 2A and 119 in Acton.

All content from Kiddle encyclopedia articles (including the article images and facts) can be freely used under Attribution-ShareAlike license, unless stated otherwise. Cite this article:
Acton, Massachusetts Facts for Kids. Kiddle Encyclopedia.