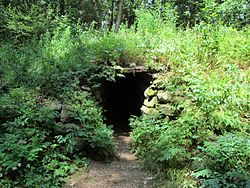 The Nashoba Brook Stone Chamber is an underground stone structure in the woods of the Nashoba Brook Conservation Area of Acton, Massachusetts. Its more common name is the "potato cave", which comes from the traditional assumption that it was once used as a root cellar. Research and excavation from 2006 supports this assertion, finding evidence of construction from the 18th or 19th century for the purpose of storing food. Some argue that it may originally have been a pre-colonial native American ceremonial stone landscape structure. Local lore states that it also served as shelter for workers on the nearby railroad in the 19th century.

The restored chamber is due to be part of Acton's Trail Through Time, which is being developed to document the settlement and use of North Acton's Nashoba Brook. Besides the stone chamber, other points on the trail will include the Pencil Mill and the Wheeler Farm site at the end of Wheeler Lane.

All content from Kiddle encyclopedia articles (including the article images and facts) can be freely used under Attribution-ShareAlike license, unless stated otherwise. Cite this article:
Nashoba Brook Stone Chamber Facts for Kids. Kiddle Encyclopedia.