Kids Encyclopedia Facts
This page is about the public park. For the adjacent hotel, see The Fairmont Copley Plaza Hotel. For the privately-owned indoor shopping mall located nearby, see Copley Place.

Copley Square named for painter John Singleton Copley, is a public square in Boston's Back Bay neighborhood, bounded by Boylston Street, Clarendon Street, St. James Avenue, and Dartmouth Street. Prior to 1883 it was known as Art Square due to its many cultural institutions, some of which remain today. It was proposed as a Boston Landmark.

Within the Square are several architectural landmarks: 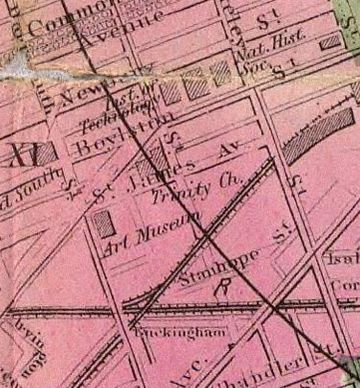 A significant number of important Boston educational and cultural institutions were originally located adjacent to (or very near) Copley Square, reflecting 19th-century Boston's aspirations for the location as a center of culture and progress. These included the Museum of Fine Arts, the Massachusetts Institute of Technology, Harvard Medical School, the New England Museum of Natural History (today's Museum of Science), Trinity Church, the New Old South Church, the Boston Public Library, the American Academy of Arts and Sciences, the Massachusetts Normal Art School (today's Massachusetts College of Art and Design), the Horace Mann School for the Deaf, Boston University, Emerson College, and Northeastern University.

Known as Art Square until 1883, Copley Square was originally cut diagonally by Huntington Avenue; it took its present form in 1961 when Huntington Avenue was truncated at the corner of Dartmouth Street, the Square partially paved, and a pyramidal fountain sculpture added. In 1991, after further changes including a new fountain, the new Copley Square Park was dedicated. The nonprofit Friends of Copley Square raises funds for care of the square's plantings, fountain, and monuments.

The Boston Marathon foot race has finished at Copley Square since 1986. A memorial celebrating the race's 100th running (in 1996) is located in the park, near the corner of Boylston and Dartmouth streets.

On April 15, 2013, around 2:50 pm (about three hours after the first runners crossed the line) two bombs exploded—​one near the finish line near the Boston Public Library, the other some seconds later and one block west. Three people were killed and at least 183 injured, at least 14 of whom lost limbs.

Copley is served by several forms of public transportation:

All content from Kiddle encyclopedia articles (including the article images and facts) can be freely used under Attribution-ShareAlike license, unless stated otherwise. Cite this article:
Copley Square Facts for Kids. Kiddle Encyclopedia.