Copley Place is an upscale enclosed shopping mall in the Back Bay section of Boston, Massachusetts, as part of a larger complex that includes four office towers, two hotels, and an underground parking garage.

As of 2021, the mall is anchored by department stores Neiman Marcus and Saks Fifth Avenue. Previous anchor store Barneys New York, which operated from 2006–2019, was replaced by a Saks Fifth Avenue men's store on August 14, 2020. 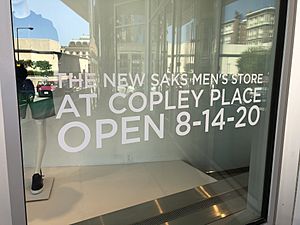 Window Display announcing the opening of the Saks Mens Store.

In November 2019, the online business news website MassLive rated Copley Place as fourth, and the immediately adjacent Shops at Prudential Center as fifth best among 40 malls and shopping centers in Massachusetts.

The mall is connected directly to the Shops at Prudential Center via a skybridge over Huntington Avenue. Another skybridge connects to the Westin at Copley Place hotel (and a few small shops), by crossing Huntington Avenue at a different location. A Marriott hotel anchors one end of Copley Place, and the Neiman Marcus department store anchors the other end. The mall is also connected to the Back Bay MBTA/Amtrak station via a pedestrian tunnel crossing beneath Dartmouth Street.

The property is managed by Simon Property Group, which acquired it in the 2002 breakup of the then Dutch-owned Urban Shopping Centers, Inc. 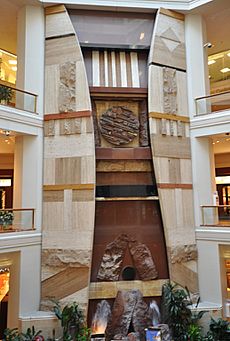 Centerpiece sculptural fountain (Dimitri Hadzi, 1984). The waterfall had been shut off (2012), and the artwork was demolished a few years later.

The structure was the first major project designed by Howard Elkus, then of The Architects' Collaborative. At the time, it was Boston's largest urban mixed-use development project, financed by the Pritzker family of Chicago. It was built in 1983 directly above the Massachusetts Turnpike and Huntington Avenue highway interchange ramps, which had been constructed in 1964 on the site of the former South End Armory. The Armory building had been completed in 1890, and was razed to make room for the Mass Pike right-of-way. Later, as a principal of Elkus Manfredi Architects, Elkus would lead several major renovations of the mall, and a proposed expansion.

In 2011, plans for a 60,000 sq ft (5,600 m2) addition of retail space to the facility and a 54,000 sq ft (5,000 m2) expansion of its Neiman Marcus anchor were approved by the Boston Redevelopment Authority. By February 2013, the project was awaiting final design plans. In October 2016, Simon Properties announced indefinite postponement of its $500-million project to build a 52-story luxury residential tower, and drastic scaling back of plans to expand the Copley Place mall, citing concerns about rising costs and competition from other Boston luxury towers already under construction.

Upon its opening, the indoor mall featured as its centerpiece a 60-foot (18 m) high sculptural fountain designed by Boston artist Dimitri Hadzi. The artwork was composed of multiple abstract granite and travertine marble shapes, with a waterfall cascading down it into a shallow pool at the bottom, surrounded by marble benches. A proposed renovation which would completely eliminate the water feature prompted commentary opposing its demolition in 2013. As of 2017[update], the fountain had been completely removed, and the location and status of its sculptural components were unknown to the general public.

From its opening, the mall has been marketed as a high-end luxury retail location. Over time, the mix of stores changed in response to sweeping changes affecting the US retailing market. For example, a sizable Rizzoli Bookstore was located opposite the elevators behind the central water feature, but it had closed by the year 2000. Other stores which have moved out include Stoddard's (fine cutlery and personal care tools) and Williams Sonoma (kitchenware and food ingredients). As of 2020[update], almost all of the stores sell fashionable clothing, shoes, or accessories.

The mall had also housed one of the few major-chain-owned movie theaters within Boston city limits, but the Loews Copley Place Cinemas was closed in January 2005. It was replaced by a Barneys New York men's clothing store, which eventually closed in February 2020 as the entire chain went out of business. Work has commenced on the conversion of the space into a Saks Fifth Avenue Men's Store, originally due to open on May 15, 2020 and opened on August 14, 2020.

All content from Kiddle encyclopedia articles (including the article images and facts) can be freely used under Attribution-ShareAlike license, unless stated otherwise. Cite this article:
Copley Place Facts for Kids. Kiddle Encyclopedia.