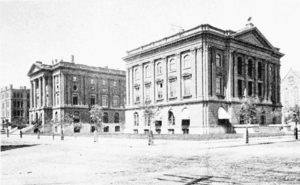 The Boston Society of Natural History (1830–1948) in Boston, Massachusetts, was an organization dedicated to the study and promotion of natural history. It published a scholarly journal and established a museum. In its first few decades, the society occupied several successive locations in Boston's Financial District, including Pearl Street, Tremont Street and Mason Street. In 1864 it moved into a newly constructed museum building at 234 Berkeley Street in the Back Bay, designed by architect William Gibbons Preston. In 1951 the society evolved into the Museum of Science, and relocated to its current site on the Charles River.

Emblem of the BSNH, adopted in 1842. Depicts Georges Cuvier

Founders of the society in 1830 included Amos Binney Jr.; Edward Brooks; Walter Channing; Henry Codman; George B. Emerson; Joshua B. Flint; Benjamin D. Greene; Simon E. Greene; William Grigg; George Hayward; D. Humphreys Storer; and John Ware. Several had previously been involved with the Linnaean Society of New England. By 1838, the society held "regular meetings on the 2nd and 4th Wednesday of each month." "In its collection are about 700 specimens in mineralogy and geology, besides the rich collection of Dr. C.T. Jackson, and the state collection; botany, 5,000; mammalia, 30 entire skeletons and 30 crania; birds, 200 species; reptiles, 130; insects, about 15,000; crustacea, 130; radiata, 190. Library, 600 volumes and pamphlets. The room ... gratuitously opened to the public every Wednesday from 12 to 2 o'clock."

"After World War II, under the leadership of Bradford Washburn, the society sold the Berkeley Street building, changed its name to the Boston Museum of Science. ... The cornerstone for the new Museum was laid at Science Park [in 1949] and a temporary building was erected to house the Museum's collections and staff. In 1951, the first wing of the new Museum officially opened."

All content from Kiddle encyclopedia articles (including the article images and facts) can be freely used under Attribution-ShareAlike license, unless stated otherwise. Cite this article:
Boston Society of Natural History Facts for Kids. Kiddle Encyclopedia.