Boxborough is a town in Middlesex County, Massachusetts, United States. The population was 4,996 at the 2010 census. The town name is often simplified to "Boxboro" on highway signs and official documents.

Boxborough is bordered by Littleton to the north, Acton to the east, Stow to the south, and Harvard to the west. Prior to incorporation in 1783, the area that is now Boxborough was part of Stow, Harvard, and Littleton.

There were 1,853 households out of which 42.8% had children under the age of 18 living with them, 60.2% were married couples living together, 5.9% had a female householder with no husband present, and 31.4% were non-families. 25.9% of all households were made up of individuals and 3.2% had someone living alone who was 65 years of age or older. The average household size was 2.63 and the average family size was 3.25.

The area which became the town of Boxborough was first inhabited by the Native Americans of the Nipmuc and Pennacook tribes. It was probably visited by colonists as early as the mid seventeenth century, when the neighboring towns of Stow and Acton were founded. However, the land in Boxborough was not settled until the beginning of the eighteenth century by farmers looking for fertile land to establish farms. Over the next decades, this area would become one of the most productive agricultural farming land in the county. Several men from the area served in the Seven Years' War.

On April 19, 1775, 21 men from Boxborough met at the Boaz Brown house on Hill road before marching with the companies of Littleton, Stow, Acton, Concord, and Harvard to the Battles of Lexington and Concord. Most of these men, previously farmers, would go on to serve the colonial militia for the remainder of the war.

Sons of Simon Blanchard, descendant of some of the earliest settlers of Boxborough (and killed during the Battle of the Plains of Abraham in 1759 during the Seven Years' War), Calvin and Luther Blanchard, are two prominent revolutionary veterans. Luther marched with Captain Isaac Davis's company of Acton to the Battle of Concord, serving as a fifer. At the North Bridge, several minute-men companies engaged with the British troops in a conflict remembered as the shot heard round the world, eventually forcing the redcoats to retreat. Blanchard is remembered by some historians as the first man wounded, but it is hard to confirm considering the nature of the battle. He received a musket-shot to the chest. Historian Lucie Hager documents Luther’s witty interaction with a Concord woman who was tending his wound:

Nurse: “A little more and you’ve been killed.”

Luther: Yes, and a little more and it would not have touched me.”

Luther died three days later, ostensibly of the wounds he received in these battles. He is buried at the Old Burial Ground in Littleton, Massachusetts. A picture of Luther is featured on the Boxborough seal. Calvin survived the war and went on to be involved in early Boxborough politics. It is after descendants of this same Blanchard family that Blanchard Memorial School was named.

A closer church served as the motivation for establishing a new district; those who lived in the extreme parts of this area found it difficult to travel all the way to church every week (the community had been built on Puritan ideals, attending church was required at this time). Perhaps the key players in this movement, fresh from fighting in the Revolutionary War, were pursuing further independence.

Boxborough was born from the remote areas of Stow, Littleton, and Harvard. A member of Middlesex County, Boxborough established a new county line between Middlesex and Worcester. On January 31, 1775, men of these outskirt-lands formed a “Sartain Society” which agreed to purchase the Harvard Old meeting-house to act as a town hall and a church.

The people of Boxborough were denied registration to be an independent district three times before being accepted in 1782, then incorporated on February 25, 1783. At first, Boxborough didn’t send a representative to the General Court, instead continuing to help elect a representative from Stow.

Besides the Blanchard family, several other early settlers of Boxborough were instrumental in its establishment as an independent district. John Wetherbee and his family built houses in what would become Boxborough as early as 1717, and some historians consider John the first settler of the area. Silas Wetherbee, born a generation later, fought for a Stow company during the Revolution, and gave the land on which the new meeting-house and church was built after the war. Silas was not just a veteran and financial backer, but was also elected as an original selectman. The Wetherbee Family continues to influence Boxborough politics for a century to come.

The Taylor brothers were also some of the first settlers in the area. Silas Taylor served as a captain in the Revolutionary War before serving as the first clerk of the district of Boxborough, as well as an original selectman and assessor. Phinehas Taylor Jr. also served as a captain in the War, going on to serve as the original treasurer and deer-reeve of the district.

Other old Boxborough families include the Hager Family, the Wood Family, and the Stone family, each of which settled in the area before its incorporation and had men serve during the Revolutionary War. Bennet Wood and Joseph Stone served as the first official Boxborough government, serving as the committee for the Sartain Society, along with moderator Henry Cooledge. Joseph Stone, originally from Harvard, was deeply involved in the area, serving as justice of the peace and a deacon of the congregational church until his death. The Wood Family was also influential in the early politics of Littleton; Bennet's father, Jeremiah, served as collector, selectman, and eventually treasurer. 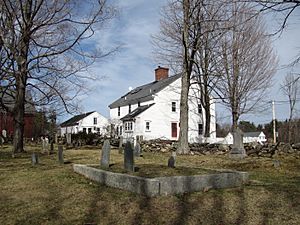 Most of these influential Boxborians were buried in the Old North Cemetery, which has graves dating back to the eighteenth century.

On October 16, 2005, the Boxborough Historical Society opened the Boxborough Museum. The museum is located at 575 Middle Road and is open several Sundays a year. Boxborough is also known for Steele Farm, a popular location for sledding and hikes, with dog-friendly conservation trails.

There is a good example of a glacial esker, over one mile in length, located in the Beaver Valley Preserve.

Boxborough is home to several historical landmarks and sites on the Freedom Trail. The Silas Taylor Farm can be found on Flagg Hill. The Silas Wethebee House (est. 1770), or Walnut Farm, can be seen today on Hill Road as part of the "Path of the Patriots."

Boxborough has fourteen distinct state, non-profit, conservation or municipal tracts of lands with trails suitable for a number of non-motorized activities. These are maintained by town volunteers and the town employees (mostly where mowing is required).

Flerra Meadows provides soccer fields, as well as a small playground and pond. Liberty Fields has a baseball diamond, multiple soccer fields and a conservation trail in the woods.

The Boxborough Mamils, a cycling group, meets regularly at Flerra Meadows for community bike rides in Boxborough and neighboring towns.

The Boxborough Minutemen Company is a historical society founded in Boxborough in 1967 with the goal of preserving the memory of the town’s role in the American Revolution, as well as serving the community. The Minutemen sponsor local activities and businesses, give out scholarships, and participate in historical reenactments.

The legacy of the revolution has lived on through several groups similar to the Minutemen Company dating back to the end of the eighteenth century. Following the Revolutionary War, the "Slam Bang Company" was founded by patriotic men of Boxborough, eventually dissolving into the "Boxborough Light Infantry Company." The goals of these groups seem purely honorary, though it is recorded that they met three times a year for annual military training through the nineteenth century.

Boxborough is known for its annual Fifer's Day celebration, put on by the Minutemen, which commemorates Luther Blanchard. Fifer’s Day is held every June at Flerra Meadows in Boxborough. It begins with a 4-mile (6.4 km) road race, followed by a parade and many different festivities. Booths with hamburgers, hot dogs, snow cones etc. line the field and games, bands and volleyball tournaments complete the afternoon. Other Fifer’s Day activities typically include pony rides, air balloon rides, fire engine demonstrations and a flea market.

All content from Kiddle encyclopedia articles (including the article images and facts) can be freely used under Attribution-ShareAlike license, unless stated otherwise. Cite this article:
Boxborough, Massachusetts Facts for Kids. Kiddle Encyclopedia.