Stow is a town in Middlesex County, Massachusetts, United States. The town is located 21 miles west of Boston, in the MetroWest region of Massachusetts. The population was 7,174 at the 2020 United States Census. Stow was officially incorporated in 1683 with an area of approximately 40 square miles. Over centuries it gave up land as newer, smaller towns were created, ceding land to Harvard (1732), Shirley (1765), Boxborough (1783), Hudson (1866) and Maynard (1871). Stow now has an area of 18.1 square miles (47 km2). With the exception of factories at Assabet Village and Rock Bottom (later Maynard and Gleasondale), Stow was primarily sparsely settled farm and orchard land until the 1950s.

Stow was officially incorporated in 1683. The earliest Colonial settlers, c. 1660, were Matthew Boon and John Kettell. Coming from Gloucester and Charlestown, Massachusetts, these two men settled the land of the Tantamous (Jethro) Native Americans, called "Pompocitticut". Boon settled by a large body of water (later bearing his name: Lake Boon), upon a hill (also bearing his name: Boon Hill), with a vast tract of land surrounding him. It is said that he traded all this for a single jackknife. He lived on what is now known as Barton Road. A monument bearing his name is located on the plot of land he formerly resided on.

John Kettell took up residence in a portion of land in the southwestern corner of Stow, where the flatness helped with farming and its proximity to the Lancaster Garrison House (in present-day Bolton, owned by Reverend Joseph Rowlandson) house proved vital in later years. John, who brought his wife, Elizabeth Allen of Salem, Massachusetts, and three children: Elizabeth, Mary, Samuel, and James (the only one born in Stow in 1665), proceeded to trade with the natives and farm the land, though very little is known for fact.

Both families were involved in King Philip's War in 1676. Boon sent his family to the Sudbury Garrison House, then proceeded to return home with one of his sons and a neighbor. All three were killed. Little, if anything, is known about the remaining Boon family, but they did survive the initial attack.

John Kettell sent his family to the Lancaster Garrison, which was also attacked and burned. The natives took twenty captives, including Mary Rowlandson (a well-known captive, the wife of Rev. Rowlandson who wrote narratives of her captivity), Mrs. Rowlandson’s sister, Mrs. Elizabeth Kettell (John Kettell's wife), and some children. All twenty were ransomed by John Hoar of Concord for £20 after several months of the native life style. The Kettell family, once reunited, moved back to Salem, Massachusetts after selling their farm.

As with many colonial era Massachusetts towns, Stow started with a large area and gave up land as newer, smaller towns were created. Stow ceded land to Harvard (1732), Shirley (1765), Boxborough (1783) and Hudson (1866). In 1871, Stow lost 1300 acres (5.3 km2) and close to half its population to the creation of Maynard. Prior to that, what became Maynard was known as "Assabet Village" but was legally still part of the towns of Stow and Sudbury. There were some exploratory town-founding rumblings in 1870, followed by a petition to the Commonwealth of Massachusetts, filed January 26, 1871. Both parent towns opposed this effort, but state approval was granted April 19, 1871. In return, the new town paid Sudbury and Stow about $23,600 and $8,000 respectively. Sudbury got more money because it owned shares in the railroad, plus the wool mill and paper mill were in Sudbury, and more land came from Sudbury. The population of the newly formed town - at 1,820 - was larger than either of its parent towns.

The village of Gleasondale is in both Hudson and Stow. An 1856 map shows Rock Bottom as an earlier name for Gleasondale - purportedly, when construction of a larger mill was underway, the workers on the foundation announced that they had hit 'rock bottom,' i.e., solid rock. The same map shows Assabet as a village on the eastern border - this became the center of the Town of Maynard in 1871. The original development of Stow - a mile east of the current center, became known as Lower Village after a meeting hall, and later, churches, were built to the west. The old cemetery on Route 117/62 is officially Lover Village Cemetery. 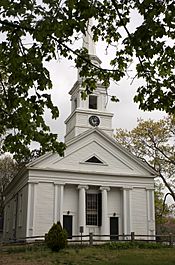 Stow may be best known for its numerous golf courses, having 4 courses and 81 total holes of golf in town. The best known of these is Stow Acres Country Club, the site of the 1995 US Amateur Public Links Championship. Numerous times it has been ranked among the best public courses in the state and boasts a top 50 pro shop for public pro shops nationally.

Stow is also well known for its numerous apple orchards and is a popular weekend destination for families during apple picking season.

Stow is home to the Massachusetts Firefighting Academy. Future firefighters come here to train to become a firefighter at the minimum age of 18.

All content from Kiddle encyclopedia articles (including the article images and facts) can be freely used under Attribution-ShareAlike license, unless stated otherwise. Cite this article:
Stow, Massachusetts Facts for Kids. Kiddle Encyclopedia.