Hudson is a town in Middlesex County, Massachusetts, United States.

Before its incorporation as a town in 1866, Hudson was a neighborhood and unincorporated village within the town of Marlborough, Massachusetts, and was known as Feltonville, and before that, known as Eastborough. From around 1850 until the last shoe factory burned down in 1968, Hudson was known as a "shoe town". At one point, the town had 17 shoe factories, many of them powered by the Assabet River, which runs through town. Because of the many factories in Hudson, immigrants were attracted to the town. Today, most people are of either Portuguese or Irish descent, with a smaller percentage of people being of French, Italian, English, or Scots-Irish descent. Hudson is served by the Hudson Public Schools district.

In 1650, the area that would become Hudson was part of the Indian Plantation for the Praying Indians. The Praying Indians were evicted from their plantation during King Philip's War, and most did not return even after the war ended.

The first European settlement of the Hudson area occurred in 1699 when settler John Barnes, who had been granted an acre of the Ockookangansett Indian plantation the year before, built a gristmill on the Assabet River on land that would one day be part of Hudson. By 1701, Barnes had also built a sawmill on the river and had built a bridge across it. Over the next century, Hudson grew slowly.

Hudson was part of the town of Marlborough and was known as Feltonville for part of that time, until its incorporation as a separate municipality in 1866. As early as June 1743 Hudson-area residents petitioned to break away from Marlborough and become a separate town, but this petition was denied by the Massachusetts General Court. Men from the present Hudson area fought with the Minutemen on April 19, 1775.

In the 1850s, Feltonville received its first railroads. The town of Hudson had two train stations, originally operated by the Central Massachusetts Railroad Company and later by Boston & Maine, until both of them were closed in 1965. This allowed the development of larger factories, some of the first in the country to use steam power and sewing machines. By 1860, Feltonville had 17 shoe and shoe-related factories, which attracted immigrants from Ireland and French Canada.

Feltonville residents, as Massachusetts recruits fought during the Civil War for the Union, with twenty-five men dying doing so. Two houses, including the Goodale Homestead on Chestnut Street (Hudson's oldest building, dating from 1702) and the Curley home on Brigham Street (formerly known as the Rice Farm), have been cited as way-stations on the Underground Railroad.

In 1865, Hudson-area residents again petitioned for Feltonville to become a separate town. This petition was approved by the Massachusetts General Court on March 19, 1866. The new town was named Hudson after Charles Hudson, who donated $500 to the new town for it to build a library, on the condition that the newly incorporated town be named after him. 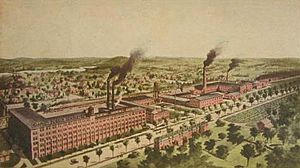 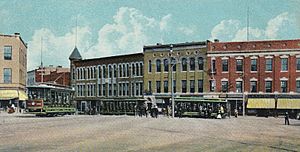 Over the next twenty years, Hudson grew as several industries settled in town. Two woolen mills, an elastic-webbing plant, a piano case factory, and a factory for waterproofing fabrics by rubber coating were built, as well as banks, five schools, a poor farm, and the town hall that is still in use today. The population hovered around 5,500 residents, most of whom lived in small houses with small backyard garden plots. The town maintained five volunteer fire companies, one of which manned the Eureka Hand Pump, a record-setting pump that could shoot a 1.5-inch (38 mm) stream of water 229 feet (70 m).

On July 4, 1894, a fire started by two boys playing with firecrackers disastrously burned down 40 buildings and 5 acres (20,000 m2) of central Hudson. Nobody was hurt, but the damages were estimated at $400,000 (1894 dollars). The town was substantially rebuilt within a year or two.

By 1900, Hudson's population reached about 7,500 residents, and the town had built a power plant, so some houses were wired for electricity. Electric trolley lines were built that connected Hudson with the towns of Leominster, Concord, and Marlborough. The factories in town continued to grow, attracting immigrants from England, Germany, Portugal, Lithuania, Poland, Greece, Albania, and Italy. These immigrants usually lived in boarding houses near their places of employment. By 1928, 19 languages were spoken by the workers of the Firestone-Apsley Rubber Company. Today, the majority of Hudson residents are of Irish or Portuguese descent, with lesser populations of Italian, French, English, Scots-Irish, and Greek descent. About one-third of Hudson residents are Portuguese or are of Portuguese descent. Most people of Portuguese descent in Hudson are from the Azorean island of Santa Maria, with a smaller amount from the island of São Miguel or from the Trás-os-Montes region of mainland Portugal. The Portuguese community in Hudson maintains the Hudson Portuguese Club, who, in 2001, rebuilt a state-of-the-art clubhouse. The Hudson Portuguese Club was established in the mid-1910s and has outlived several other ethnic clubs, such as the town's long-gone Italian Club. Recent immigrants to Hudson arrive mainly from Mexico, Central America, Brazil, and other South American countries, as well as Asia, and Europe.

Hudson's population remained about the same until after World War II, when developers purchased some farms that surrounded the town center. The new houses that were built on this land more than doubled Hudson's population. Recently, high-technology companies have built plants, notably the semiconductor fabrication factory that Digital Equipment Corporation built (now owned by Intel). Although the population of Hudson is now about 20,000, the town continues traditional town meeting form of government.

Feltonville was the name of what is today the town of Hudson, Massachusetts. Before becoming a separate incorporated town, Hudson was a neighborhood and unincorporated village within the town of Marlborough, Massachusetts, known as Feltonville. The name was derived from the name of Silas Felton (1776-1828), who operated a dry goods store in the hamlet from 1801 onward, served many years as selectman, town clerk, town assessor, and in 1828 became the first postmaster. The name was used from 1828 until the town was incorporated as Hudson in 1866. Today, the Felton name is found in the Silas Felton Hudson Historic District and two street names: Felton Street and Feltonville Road.

Hudson has had other, earlier names:

Hudson is bordered by five other towns:

Bolton and Stow on the north, Marlborough on the south, Sudbury on the east, and Berlin on the west.

The neighborhood and unincorporated village of Gleasondale straddles both Hudson and Stow.

There were 6,990 households out of which 32.0% had children under the age of 18 living with them, 56.7% were married couples living together, 9.2% had a female householder with no husband present, and 30.7% were non-families. 25.2% of all households were made up of individuals and 9.5% had someone living alone who was 65 years of age or older. The average household size was 2.57 and the average family size was 3.11.

Here are the highways that run through Hudson:

Hudson has been a candidate of bus transportation, along with Milford. 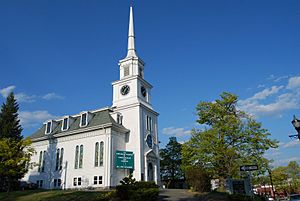 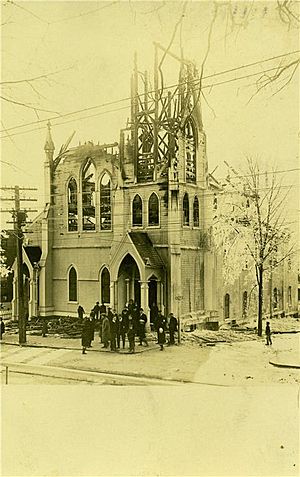 Methodist-Episcopal Church after 1911 fire; it was replaced in 1913

Churches no longer in use

A very small fraction of the town's population is Jewish and Orthodox, but there is not yet a synagogue or an Orthodox church in Hudson. Hudson nevertheless has an important role in the formation of the Albanian Orthodox Church due to the 1906 Hudson incident in which an Albanian national was refused burial by a Greek Orthodox priest from Hudson.

All content from Kiddle encyclopedia articles (including the article images and facts) can be freely used under Attribution-ShareAlike license, unless stated otherwise. Cite this article:
Hudson, Massachusetts Facts for Kids. Kiddle Encyclopedia.