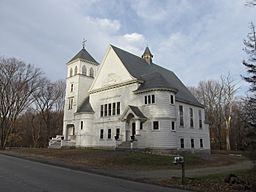 Gleasondale is a village in the towns of Hudson and Stow in Middlesex County, Massachusetts, United States. It could be considered to start where Main Street in Hudson becomes Wilkins Street, and runs until the intersection of Gleasondale Road and Great Road in Stow. According to the Geographic Names Information System (GNIS), Gleasondale is a "populated place" and is named after Benjamin W. Gleason and Samuel J. Dale. It has an elevation of 187 feet, or 57 meters. Until its closure in 1965, the Gleasondale Station — one of two train stations in Hudson — served the village. It was originally operated by the Central Massachusetts Railroad Company, and later by Boston & Maine. The station's name is printed as "Rocky-bottom" in the 1888 map of the Central Massachusetts Railroad's route at right.

This settlement began c. 1750 with the construction of a dam and lumber mill on the Assabet River. The area was originally known as Randall's Mills. In 1813, the Rock Bottom Cotton & Woolen Company built a wood-framed textile mill at Randall's Mills and the emerging village and new post office became known as Rock Bottom. The current five-story brick mill building was built in 1854 after the original wooden building burned. The name of the village was changed to Gleasondale in 1898.

Today, Gleasondale has a few residential buildings, plus a small industrial complex. It does not have a large enough population to support a post office, and uses the same zip code as Stow, 01775. The dam remains, even though it no longer provides hydropower.

All content from Kiddle encyclopedia articles (including the article images and facts) can be freely used under Attribution-ShareAlike license, unless stated otherwise. Cite this article:
Gleasondale, Massachusetts Facts for Kids. Kiddle Encyclopedia.