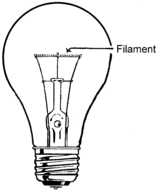 An incandescent light bulb has a small thin wire with two bigger wires holding it up. This wire is called a filament. The filament is the part of the light bulb that produces light.

Filaments in incandescent light bulbs are made of tungsten. Whenever an electric current goes through the filament, the filament glows. It may also be known as the electron emitting element in a vacuum tube. To make the bulb produce more light, the filament is usually made of coils of fine wire, also known as the coiled coil.

All content from Kiddle encyclopedia articles (including the article images and facts) can be freely used under Attribution-ShareAlike license, unless stated otherwise. Cite this article:
Electrical filament Facts for Kids. Kiddle Encyclopedia.