Maynard is a town in Middlesex County, Massachusetts, United States. The town is located 22 miles west of Boston, in the MetroWest and Greater Boston region of Massachusetts and borders Acton, Concord, Stow and Sudbury. The town's population was 10,746 as of the 2020 United States Census.

Maynard is located on the Assabet River, a tributary of the Concord River. A large part of the Assabet River National Wildlife Refuge is located within the town, and the Assabet River Rail Trail connects the Refuge and downtown Maynard to the South Acton commuter rail station. Historic downtown Maynard is home to many shops, restaurants, galleries, a movie theater, and the former Assabet Woolen Mill, which produced wool fabrics from 1846 to 1950, including cloth for Union Army uniforms during the Civil War. Maynard was the headquarters for Digital Equipment Corporation from 1957 to 1998. Owners of the former mill complex currently lease space to office and light-industry businesses.

Maynard, located on the Assabet River, was incorporated as an independent municipality in 1871. Prior to that it was known as "Assabet Village" but was legally still part of the towns of Stow and Sudbury. There were some exploratory town-founding rumblings in 1870, followed by a petition to the Commonwealth of Massachusetts, filed January 26, 1871. State approval was granted April 19, 1871. In return, the new town paid Sudbury and Stow about $23,600 and $8,000 respectively. Sudbury got more money because it owned shares in the railroad, plus the wool mill and paper mill were in Sudbury, and more land came from Sudbury. The population of the newly formed town - at 1,820 - was larger than either of its parent towns.

Formation of new towns carved out of older ones was not unique to Maynard. Hudson, with its cluster of leather processing and shoe-making mills, seceded from Marlborough and Stow in 1866. In fact, the originally much larger Stow formed in 1683 lost land to Harvard, Shirley, Boxborough, Hudson and Maynard. The usual reason to petition the State's Committee on Towns was that a fast-growing population cluster - typically centered around mills - was too far from the schools, churches and Meeting Hall of the parent town.

The community was named after Amory Maynard, the man who, with William Knight, had bought water-rights to the Assabet River, installed a dam and built a large carpet mill in 1846-47. The community grew along with the Assabet Woolen Mill and made the highest percentage of wool for U.S. military uniforms for the Civil War. The woolen mill went bankrupt in 1898; it was purchased in 1899 by the American Woolen Company, a multi-state corporation, which greatly modernized and expanded the mill complex from 1900 through 1919. From 1910 through 1940, the population of Maynard was larger than that of Acton, Stow and Sudbury, combined.

There was an attempt in 1902 to change the town's name from "Maynard" to "Assabet". Some townspeople were upset that Amory Maynard had not left the town a gift before he died in 1890, and more were upset that Lorenzo Maynard, Amory's son, had withdrawn his own money from the Mill before it went bankrupt in 1898. The Commonwealth of Massachusetts decided to keep the name as "Maynard" without allowing the topic to come to a vote by the residents.

After the woolen mill finally shut down in 1950, local businessmen bought the property and began leasing it as office or manufacturing space. Digital Equipment Corporation (DEC) moved into the complex in 1957, initially renting only 8,600 square feet. The company grew and grew until it bought the entire complex in 1974, which led to Maynard's nickname "Mini Computer Capital of the World". DEC remained in Maynard until 1998 when it was purchased by Compaq, which was itself later bought out by Hewlett Packard in 2002. The mill complex was nearly empty for almost ten years.

"The Mill", as locals call it, was renovated in the late 1990s and renamed "Clock Tower Place" (2000-2015), and then renamed "mill&main" by new owners in 2016. The site houses many businesses, including the headquarters of Powell Flutes and up to 2014 Monster.com. The mill complex is also home to the oldest, still-working, hand-wound clock in the country (see image). The clock tower was constructed in 1892 by Lorenzo Maynard as a gift to the town. The weights that power the E. Howard & Co. tower clock and bell-ringing mechanisms are wound up once a week - more than 6,000 times since the clock was installed. The process takes one to two hours. The four clock faces have always been illuminated by electric lights.

Glenwood Cemetery, located south of downtown Maynard, was added to the National Register of Historic Places in 2004. 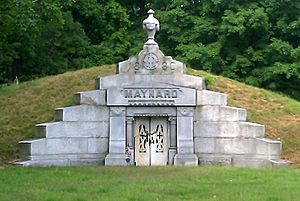 John Maynard, born 1598, came over from England with his wife Elizabeth (Ashton) Maynard around 1635. Five generations later, Isaac Maynard was operating a mill in Marlborough. When he died in 1820 at age 41 his teenage son, Amory Maynard, took over the family business. The City of Boston bought Amory's water rights to Fort Meadow Pond in 1846. He partnered with William Knight to start up a woolen mill operation on the Assabet River. Amory and his wife Mary (Priest) Maynard had three sons: Lorenzo (1829-1904), William (1833-1906) and Harlan (1843-1861). Amory managed the mill from 1847-1885 (Knight retired in 1852). Lorenzo took over from 1885 to 1898. William had less to do with the family business - he lived in Boston a while, then Maynard again, then off to Pasadena, California in 1885 for reasons of ill health (possibly tuberculosis). He recovered and moved back east to Worcester in 1888 for the remainder of his life. Harlan died at age 18.

Lorenzo married Lucy Davidson and had five children, but all of them died without issue - the four daughters passing away before their parents. William married Mary Adams and had seven children. Descendants of two - Harlan James and Lessie Louise - are alive today, but not living locally. William's granddaughter, Mary Augusta Sanderson, who died in 1947, was the last descendant to live in Maynard.

The Maynard Crypt is a prominent feature on the north side of Glenwood Cemetery, within sight of passers-by on Route 27. It is an imposing earth-covered mound with a granite facade facing the road. The mound is 90 feet across and about 12 feet tall. The stonework facade is approximately 30 feet across. The ceiling of the crypt has a glass skylight surmounted by an exterior cone of iron grillwork. The granite lintel above the door reads "MAYNARD." Chiseled above the lintel are the year 1880 and the Greek letters Alpha and Omega entwined with a Fleur-de-lis Cross. Amory Maynard, his wife, Mary, and twenty of their descendants are interred in the crypt. At one point in time Amory's first son, Lorenzo, along with Lorenzo's wife and their four daughters, were also in the crypt, but in October 1904 Lorenzo's son arranged to have his six family members moved to a newly constructed mausoleum in Mount Auburn Cemetery, Cambridge, Massachusetts. Lorenzo had contracted for the mausoleum while still alive but died before it was completed. William, Amory's second son, was buried in the Hope Cemetery, Worcester, along with his wife and four of their seven children. 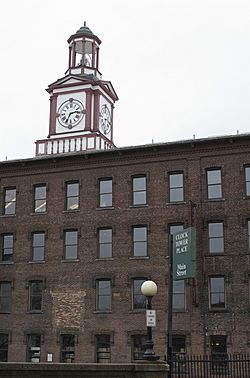 The Assabet River flows through Maynard from west to east, spanned by seven road bridges and one foot bridge. The river's vertical drop from the Stow border to the Acton border is 30 feet (9 m). Initially, this was sufficient to hydropower the wool and paper mills, but both later added coal-powered steam engines. Average flow in the river is 200 cubic feet per second. However, in summer months the average drops to under 100 cfs. The flood of March 2010 reached 2,500 cfs. Recent, monthly and annual riverflow data is available from the U.S. Geological Service.

Average precipitation, long-term, is 43 inches (1,092 mm) per year, which includes 44 inches (112 cm) of snow. (The snow-to-water conversion is roughly 8 inches or 20 centimetres snow melts to one inch of water.) However, there has been a trend over the past 100 years of increasing precipitation, so the more recent average is closer to 50 inches per year (127 cm/year), and six of the snowiest winters on record have been since 1992-93.

Maynard borders the towns of Acton, Concord, Sudbury and Stow.

The nearest rail station is in South Acton on the MBTA Commuter Rail Fitchburg Line. Connection to Route 2 is four miles. Connections to I-95 in the east and I-495 in the west are both 8 miles.

Construction started on a 3.4 four mile portion of the Assabet River Rail Trail in 2016. When completed in 2018, will run from the South Acton train station at the north end, though the center of Maynard, and along the Assabet River to the Maynard:Stow border, where, via White Pond Road, there is access to the Assabet River National Wildlife Refuge. ARRT will be open for non-motorized transportation (skateboards, bicycles, etc.). See www.ARRTinc.org for construction updates.

History of former places of worship: 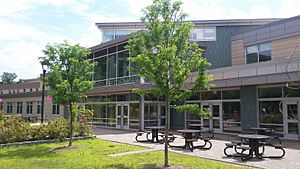 Maynard has three public schools on adjoining campuses off Route 117. There is also an adult education program. One private school offers a classical Christian education program for grades K through 8. 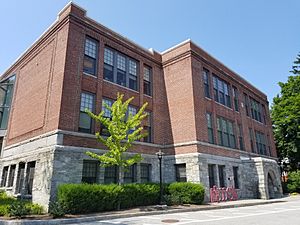 All content from Kiddle encyclopedia articles (including the article images and facts) can be freely used under Attribution-ShareAlike license, unless stated otherwise. Cite this article:
Maynard, Massachusetts Facts for Kids. Kiddle Encyclopedia.