In 2004–06 the principal intersection, including the area adjacent to the shopping center, underwent extensive construction both to improve access for vehicles, pedestrians, bicyclists, and mass transit users, and to improve drainage and storm water conditions. The artist Toshihiro Katayama of Harvard University, in conjunction with the landscape architect Cynthia Smith, designed a new visual look for the new circulation design, including contrasting light and dark concrete paving, stone walls and boulders. 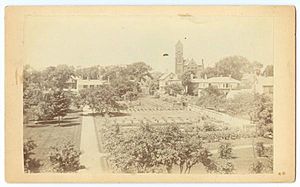 The Rand Estate, on site of what is now Porter Square Shopping Center, 1900 or earlier

Previously called Union Square, Porter Square was renamed in 1899 for the now-vanished Porter's Hotel, operated by Zachariah B. Porter, who also left his name to the hotel's specialty, the cut of steak known as porterhouse. The hotel was demolished in 1909. The square, formerly flanked by cattle yards that used the Porter rail head to transport their beef throughout the US, was an important center for commerce and light industry as early as the late 18th century. A tunnel for moving cattle to and from the railroad without interfering with street traffic, known as the Walden Street Cattle Pass, was built in 1857. The tunnel survives under the nearby Walden Street Bridge, and in 2007–08 was preserved and restored. The "most dramatic loss" of early 19th century landscape in the square was the leveling of the old Rand Estate in 1952 to make way for the Porter Square Shopping Center.

In 1984 the Red Line was extended from Harvard through Porter and Davis Square to its present terminus at Alewife, a project that also left Porter with its most visible landmark, Susumu Shingu's 46-foot painted steel and aluminum kinetic sculpture entitled Gift of the Wind. Porter Square railroad history is covered in greater detail in the Porter Square station article. 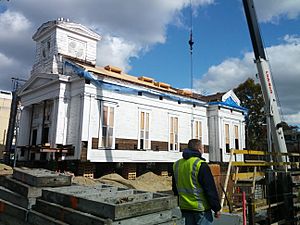 Lesley University continues to expand in the Porter Square neighborhood, with construction underway to relocate its College of Art and Design to the North Prospect Church and a new building that will be built on the church's former site at the corner of Massachusetts Avenue and Roseland Street.

The presence of chronically homeless individuals has persisted in recent years in the Porter Square area. Aware of this issue, designers of the Square's 2004 redevelopment intentionally limited the amount of public seating available because of controversy and fear of providing the homeless with a place to rest. However, some have found shelter inside the route 83 bus shelter at Porter Square Station, partially inhibiting its intended use. Another homeless individual, who was on the commuter rail tracks in 2007, was struck and killed by an MBTA train. In its Annual Crime Reports, the Cambridge Police Department has repeatedly named Porter Square as one of the city's "hotspots" of homeless activity, noting that it has been a "constant hang out for homeless people to gather and in some cases, to sleep."

All content from Kiddle encyclopedia articles (including the article images and facts) can be freely used under Attribution-ShareAlike license, unless stated otherwise. Cite this article:
Porter Square Facts for Kids. Kiddle Encyclopedia.