Ayer is a town in Middlesex County, Massachusetts, United States. Originally part of Groton, it was incorporated February 14, 1871 and became a major commercial railroad junction. The town was home to Camp Stevens, a training camp for Massachusetts volunteers during the American Civil War. Later, Fort Devens was established by the federal government to train New England soldiers for World War I. Fort Devens is a major influence on the area, although it is considerably smaller than when it was first closed in the mid-1990s. The town's population was 7,427 at the 2010 census.

For geographic and demographic information on specific parts of the town of Ayer, please see the articles on Ayer (CDP) and Devens, Massachusetts. 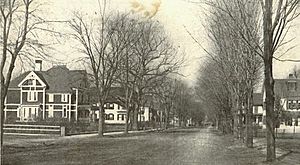 Ayer's history dates back to 1667, when the first mill in the agricultural community was built. The settlement sits on what the Nipmuc Indians called Nainacocius. A brook remains with that name. Originally part of Groton, the community was initially called Groton Junction or South Groton. The town of Ayer was incorporated in 1871, and was named in honor of Dr. James Cook Ayer, a prominent resident of Lowell who provided the funding for the construction of the Town Hall.

The town's growth was influenced by a period of rapid development of railroad transportation. Though only 9.5 square miles (25 km2) in area, the town became a major junction for both east-west and north-south rail lines, and developed into an important commercial center oriented towards the rail industry. Known as Groton Junction and later Ayer Junction, the intersecting railroads included:

The split between the Stony Brook and Fitchburg main line was moved east from the central junction to reduce parallel trackage. 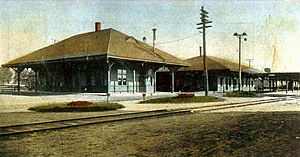 During the Civil War an army training camp, Camp Stevens, was located near the Nashua River. Camp Devens, which eventually became Fort Devens, was established in 1917, during World War I. The presence of thousands of military and civilian personnel on the base shifted Ayer's commercial development towards meeting their needs until Fort Devens was closed in 1996, but was reopened the next day as a reserve training area. It has since been reopened, although on a much smaller scale then the days when it was active.

In 1935, the largest Nordic ski jump in North America was constructed at Pingry Hill near the Willows. A 700-foot-high wooden trestle build, the ski jump operated for a single winter season amid the hardships of Great Depression-era Ayer. Part of the structure was blown down by the wind in the summer of 1936 and it was never rebuilt. Some of the lumber was salvaged by local residents over the next few years. As of 2013, no trace of the massive structure remains.

Within its relatively small area Ayer boasts numerous industries, including plants belonging to Cains, Vitasoy and Pepsi, a historical downtown unique to the region, and modern commuter rail service to Boston.

There were 3,063 households of which 26.5% had children under the age of 18 living with them, 46.0% were married couples living together, 2.8% had a male householder with no wife present, 11.9% had a female householder with no husband present, and 39.3% were non-families. 32.4% of all households were made up of individuals and 10.7% had someone living alone who was 65 years of age or older. The average household size was 2.26 and the average family size was 2.86.

Montachusett Regional Transit Authority (MART) supplies Councils-On-Aging service. Commuter rail service from Boston's North Station is provided by the MBTA with a stop in Ayer on its Fitchburg Line.

Freight travels daily through Ayer over the tracks of the historic Stony Brook Railroad. The line currently serves as a major corridor of Pan Am Railway's District 3 which connects New Hampshire and Maine with western Massachusetts, Vermont, and New York.

The southern segment of the Nashua River Rail Trail commences in Ayer.

Places on the National Register of Historic Places:

All content from Kiddle encyclopedia articles (including the article images and facts) can be freely used under Attribution-ShareAlike license, unless stated otherwise. Cite this article:
Ayer, Massachusetts Facts for Kids. Kiddle Encyclopedia.