Shirley is a town in Middlesex County, Massachusetts, United States. It is approximately fifty miles west-northwest of Boston. The population was 7,211 at the 2010 census. The town has a well-preserved historic New England town center.

It is home to the Massachusetts Correctional Institution – Shirley, a medium-security state prison. (The neighboring maximum-security Souza-Baranowski Correctional Center lies just outside the town limits in the town of Lancaster.) The remains of a Shaker village have been preserved within the grounds of the prison. 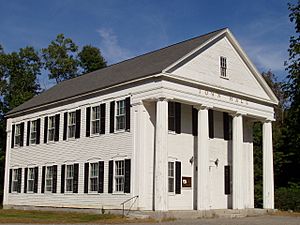 The inhabitants at the time of European encounter were Nipmuc (or Pennacook) Indians, who called the area Catacunemaug. Once part of "The Plantation of Groton," Shirley was first settled by English pioneers about 1720.

In 1753 it separated from Groton and was incorporated, named in honor of William Shirley, governor of Massachusetts (1741–1757). A paper mill was built here around 1790 and in 1812 Shirley established the first of seven cotton mills. Other local products included iron, nails, textiles, rope, belts, suspenders, and athletic equipment. Two of the large 19th-century mill buildings have been subdivided and adapted for use by 21st-century businesses. 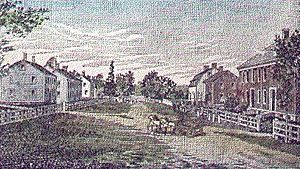 A utopian religious community, Shirley Shaker Village, was established in Shirley in 1793. The Shakers advocated pacifism, common property, celibacy and communal living. They are renowned for their plain architecture and furniture. The Shaker movement peaked in the 1840s, but gradually dwindled, perhaps because of greater employment opportunities offered by the Industrial Revolution, or because succeeding generations grew less tolerant of the Shaker church's insistence on self-abnegation. Shirley Shaker Village closed in 1908.

A medium-security state prison was built on land surrounding the remains of the Shaker village in Shirley, and continues to operate. The town also operates a Senior Center located at 9 Parker Road.

The town has a total area of 15.9 square miles (41.2 km²), of which 15.8 square miles (41.0 km²) is land and 0.1 square mile (0.2 km²) (0.50%) is water. It is bounded by the Squannacook and Nashua rivers and contains Mulpus Brook and Catecunemaug Brook. Significant wetlands are Spruce Swamp (drained by Spruce Swamp Brook) and Tophet Swamp.

This article describes the town of Shirley as a whole. Additional demographic detail is available which describes only the central settlement or village within the town, although that detail is included in the aggregate values reported here. See: Shirley (CDP), Massachusetts.

There were 2,067 households out of which 34.2% had children under the age of 18 living with them, 56.2% were married couples living together, 9.3% had a female householder with no husband present, and 31.0% were non-families. 25.4% of all households were made up of individuals and 8.7% had someone living alone who was 65 years of age or older. The average household size was 2.55 and the average family size was 3.09.

Commuter rail service from Boston's North Station is provided by the MBTA with a stop in Shirley on its Fitchburg Line. The Montachusett Regional Transit Authority (MART) supplies Councils-On-Aging service for elderly and disabled residents.

All content from Kiddle encyclopedia articles (including the article images and facts) can be freely used under Attribution-ShareAlike license, unless stated otherwise. Cite this article:
Shirley, Massachusetts Facts for Kids. Kiddle Encyclopedia.