Fort Devens is a United States Army Reserve military installation in the towns of Ayer and Shirley, in Middlesex County and Harvard in Worcester County in the U.S. state of Massachusetts. It was named after jurist and Civil War general Charles Devens. The nearby Devens Reserve Forces Training Area is located in Lancaster. Although closed in 1996, the fort was reopened the next day as the Devens Reserve Forces Training Area. The name reverted to Fort Devens in May 2007.

The fort has a population of 306 enlisted personnel, 2,151 reservists, 348 civilians, and 1,399 family members. It also maintains 25 ranges, 21 training areas, and 15 maneuver areas on nearly 5,000 acres (20 km2) of land. Furthermore, it is also home to the United States Army Base Camp Systems Integration Laboratory as well as the United States Army System Integration Laboratory.

Part of the former area of the military base is now home to Federal Medical Center, Devens, a federal prison for male inmates requiring specialized or long-term medical or mental health care.

The first military base on the site was established by Major Simon Willard, an English army officer, in 1656. Willard, a founder of the town of Concord, Massachusetts, was the commanding officer of “Willard’s Dragoons” of the Militia of the Massachusetts Bay Colony, one of the earliest organized military forces in central Massachusetts. Willard's home was situated near the Verbeck Gate of Fort Devens, and was destroyed in 1676 in a Nehântick raid during King Philip's War. A memorial erected in 1934 marks the location today. During the Civil War the site was used for Camp Stevens, home to the 53rd Regiment Massachusetts Volunteer Infantry.

Camp Devens was established on September 5, 1917 as a temporary cantonment for training soldiers during World War I. It was a reception center for war selectees and became a demobilization center after the war. Three divisions (the 12th, the 26th and the 76th) were activated and trained at Devens during the war. Robert Goddard briefly used the post for his rocket operations in 1929. The camp became a permanent installation in 1931 and was named Fort Devens the following year. A few years later, Fort Devens Army Airfield was established.

In 1940, at the onset of World War II, Fort Devens was designated a reception center for all men in New England who would serve one year as draftees. A massive $25 million building project was begun, including more than 1200 wooden buildings and an airfield. The 1st, 32nd, and 45th Divisions trained at Devens during the war. Devens also housed a prisoner of war camp for German and Italian prisoners from 1944 to 1946. It was designated as early as 1942 for detaining "enemy aliens" of Italian, German and Japanese birth.

The 7th Infantry Regiment, 3rd Infantry Division was located at Fort Devens from 1946 to 1950. Already at reduced strength, the regiment was further decimated when a battalion from Fort Devens was redesignated as the Third Battalion, Eighth Cavalry Regiment, and sent to Korea to join the 1st Cavalry Division. The 7th Infantry deployed to San Francisco, California and sailed for Japan on 20 August 1950, arriving on 16 September 1950 to marry-up with the 15th Infantry Regiment and the division headquarters.

In the 1950s or 1960s the fort was home to the 56th Air Defense Artillery Brigade, part of 1st Region, Army Air Defense Command.

Fort Devens was the home of the 10th Special Forces Group (Airborne), less 1st Battalion based in (West) Germany, from 1968 until the Group's move to Fort Carson, Colorado in 1995. It was also the home of the 39th Engineer Battalion (CBT) until the 39th was deactivated in 1992. The 39th Engineer (CBT) was reactivated in 2014 at Fort Campbell, Kentucky. The Army Security Agency Training Center & School (ASATC&S) was established at Devens in April 1951. During the 1970s it became known as the U.S. Army Intelligence School, Devens, or USAISD, and was moved to Fort Huachuca in 1996. The 36th Medical Battalion including the 595th Medical Company and the 46th Combat Support Hospital, the 46th CSH was deactivated July 15th, 1994. Finally, the 624th Military Police Company was stationed until the post closed. 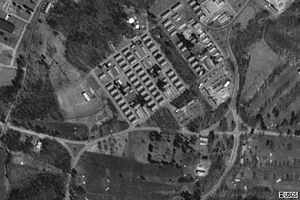 Barracks as seen from the air in 1995, now demolished

The U.S. Army post which resided at Fort Devens was officially closed in 1996 after 79 years of service. The process for land distribution for all parcels on the former Fort Devens allowed the Federal Bureau of Prisons, Shriver Job Corps, Massachusetts National Guard, Massachusetts Veterans and MassDevelopment to acquire the land. The bulk of the land was purchased by MassDevelopment for $17 million with the aim of turning Devens into a residential and business community. Since the closing of the military base, many of the existing buildings have been renovated or reconstructed; housing developments now exist, along with a growing business park, a new hotel, restaurants, several public and private schools, a disc golf course, and a golf course. Veterans of the Army Security Agency have also expressed interest in building a museum there as Fort Devens was their principal training facility for nearly 25 years.

Although no longer an active duty Army military installation, Devens is now an U.S. Army Reserve installation under the command the Army Installation Management Command (IMCOM) with a significant Marine Corps Reserve presence. In 2007 the headquarters of the 94th Regional Readiness Command, which was responsible for the command and control of Army Reserve units throughout New England, as well as providing Army Reserve support for Federal Emergency Management Agency operations in the New England region, was disbanded under the consolidation of forces and buildings within the area became under the control of the 99th Regional Support Command, which is located at Fort Dix, New Jersey, and whose Commanding General serves as the Senior Commander for Ft. Devens. The units with the original 94th Regional Readiness Command were realigned with similar commands along the East Coast. The base still remains an active training site for Reserve and National Guard Forces as well as regional law enforcement agencies.

The Army announced in 2008 that it would build a new training center in the area. This was dedicated in 2011 as the Connolly Armed Forces Reserve Center. The three buildings total 280,000 square feet and are on 57 acres. It also supports 650 Army Reserve and Army National Guard Soldiers and Marines and includes space to store nearly 800 military vehicles. The total cost was $100 million.

In January 2011 a group of Devens residents filed a citizens' petition for Devens to become a legally incorporated town. Efforts to make Devens the state's 352nd town failed on the local level in 2006, and these residents say a legislative solution could be their final option.

The following military units are based at this location:

All content from Kiddle encyclopedia articles (including the article images and facts) can be freely used under Attribution-ShareAlike license, unless stated otherwise. Cite this article:
Fort Devens Facts for Kids. Kiddle Encyclopedia.