Burlington is a town in Middlesex County, Massachusetts, United States. The population was 24,498 at the 2010 census. 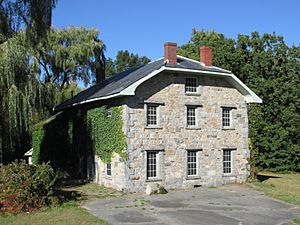 It is believed that Burlington takes its name from the English town of Bridlington, Yorkshire but this has never been confirmed . It was first settled in 1641 and was officially incorporated on February 28, 1799; several of the early homesteads are still standing, such as the Francis Wyman House, dating from 1666. The town is sited on the watersheds of the Ipswich, Mystic, and Shawsheen rivers. In colonial times up through the late 19th century, there was industry in the mills along Vine Brook, which runs from Lexington to Bedford and then empties into the Shawsheen River. 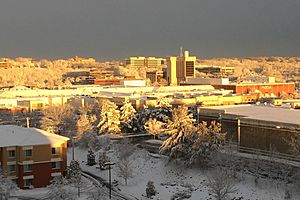 Burlington is now a suburban industrial town at the junction of the Boston-Merrimack corridor, but for most of its history it was almost entirely agricultural, selling hops and rye to Boston and supplementing that income with small shoe-making shops. Early railroad expansion passed the town by (although the town was serviced by the Middlesex Turnpike), limiting its early development, and Burlington continued to cure hams for the Boston market and produce milk, fruit, and vegetables.

This picture changed drastically, however, as soon as Route 128 was built. The highway kicked off an enormous expansion, and between 1955 and 1965 Burlington was the fastest growing town in the state. In one five-year period, its population tripled as residential and commercial retail development exploded creating the town's present character.

Burlington has graduated many prominent athletes, including four Olympians, and others who have gone to have successful careers in the NHL, NFL, and Major League Baseball.

Located in the Greater Boston Area of eastern Massachusetts, Burlington is bordered by Bedford on the west, Billerica on the north, Wilmington on the northeast, Woburn on the southeast, and Lexington on the south. Burlington is 12 miles (19 km) south of Lowell, 12 miles (19 km) northwest of Boston, 36 miles (58 km) southeast of Fitchburg, and 224 miles (360 km) from New York City. and Its highest point is Greenleaf Mountain (290 feet (88 m) above sea level), the lowest point is the Great Meadow 150 feet (46 m) above sea level. The elevation at Town Hall is 220 feet (67 m) above sea level. The largest body of water is the 500-million-US-gallon (1,900,000 m3) Mill Pond Reservoir in the eastern part of the town.

There were 8,289 households out of which 32.6% had children under the age of 18 living with them, 65.2% were married couples living together, 9.1% had a female householder with no husband present, and 23.1% were non-families. 19.1% of all households were made up of individuals and 7.7% had someone living alone who was 65 years of age or older. The average household size was 2.76 and the average family size was 3.18.

As of 2014, 19.5% of the residents of Burlington were born outside of the United States.

All content from Kiddle encyclopedia articles (including the article images and facts) can be freely used under Attribution-ShareAlike license, unless stated otherwise. Cite this article:
Burlington, Massachusetts Facts for Kids. Kiddle Encyclopedia.