Kids Encyclopedia Facts
This page is about the town in Massachusetts. For the town in the United Kingdom, see Chelmsford.

Chelmsford is a town in Middlesex County, Massachusetts in the Greater Lowell area. As of the 2010 United States Census, the town's population was 33,802. Only 48.4% are male and the median age of residents in Chelmford is 39.2 years old. It is located 24 miles (39 km) northwest of Boston and, bordering on the city of Lowell, is part of the Greater Lowell metropolitan area. Besides Lowell on its northeast, Chelmsford is surrounded by four towns: Tyngsborough to the north, Billerica to the southeast, Carlisle to the south, and Westford to the west. Chelmsford is bordered by two sizable rivers: the Merrimack River to the north, and the Concord River to the east.

Named after Chelmsford, England, the town was incorporated in May 1655 by an act of the Massachusetts General Court. When Chelmsford was incorporated, its local economy was fueled by lumber mills, limestone quarries and kilns. The Chelmsford militia played a role in the American Revolution at the Battle of Lexington and Concord and the Battle of Bunker Hill. The town's own Lieutenant Colonel Moses Parker fought on the hill. He was wounded and captured, and died from his wounds on July 4, 1775. The Lieutenant Colonel Moses Parker Middle School honors his name, and the lobby displays a representation of the man. The farming community of East Chelmsford was incorporated as Lowell in the 1820s; over the next decades it would go on to become one of the first large-scale factory towns in the United States because of its early role in the country's Industrial Revolution. Chelmsford experienced a drastic increase in population between 1950 and 1970, coinciding with the connection of U.S. Route 3 in Lowell to Massachusetts Route 128 in the 1950s and the extension of U.S. Route 3 from Chelmsford to New Hampshire in the 1960s.

Chelmsford has a representative town meeting form of government. The current town manager is Paul Cohen. The town has one public high school – Chelmsford High School, which is ranked among the top 500 schools in the nation – as well as two middle schools, and four elementary schools. The charter middle school started in Chelmsford became a regional charter school (Innovation Academy Charter School) covering grades 5 through 12, now located in Tyngsborough. Chelmsford high school age students also have the option of attending the Nashoba Valley Technical High School, located in Westford. In 2011, Chelmsford was declared the 28th best place to live in the United States by Money magazine.

Settlers from the adjacent communities of Woburn and Concord founded Chelmsford. An act of the Massachusetts General Court in the last week of May 1655 town incorporated Chelmsford, and it was named after Chelmsford, England. The nearby communities of Groton and Billerica were incorporated at the same time. Chelmsford originally contained the neighboring town of Westford, and parts of Carlisle, Tyngsborough, and a large part of Lowell (formerly known as East Chelmsford). Both the Middlesex Canal and Middlesex Turnpike, major transportation routes, were built through Chelmsford in the first part of the 19th century. 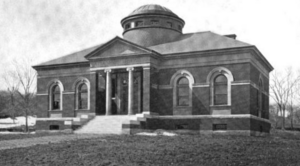 The Chelmsford militia played a role in the American Revolution at the Battle of Lexington and Concord and the Battle of Bunker Hill in 1775, the latter where Colonel Moses Parker (namesake of the Parker School) and Captain Benjamin Walker of this town were killed.

Ralph Waldo Emerson opened a school in Chelmsford in 1825, closing it after a few months to take over his brother's school in Roxbury.

Chelmsford was the birthplace of the Chelmsford Spring Co. in 1901, which later became the Chelmsford Ginger Ale Company, acquired by Canada Dry in 1928. The ginger ale plant, rebuilt in 1912 after a disastrous fire consumed the original plant, stood on Route 110 until its demolition in 1994. The Chelmsford brand of golden ginger ale continued to be manufactured by Canada Dry for decades. It is currently manufactured by Polar Beverages for DeMoulas/Market Basket supermarkets, based out of neighboring Tewksbury.

Like much of the rest of Massachusetts, Chelmsford has a humid continental climate according to the Köppen climate classification. Summers are typically warm and humid, while winters tend to be cold, windy, and snowy. The level of precipitation is roughly consistent throughout the year. 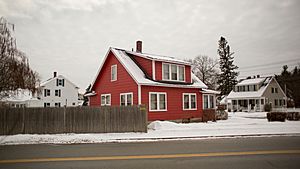 There were 12,812 households out of which 34.4% had children under the age of 18 living with them, 61.0% were married couples living together, 9.0% had a female householder with no husband present, and 27.4% were non-families. 23.1% of all households were made up of individuals and 9.6% had someone living alone who was 65 years of age or older. The average household size was 2.61 and the average family size was 3.11. 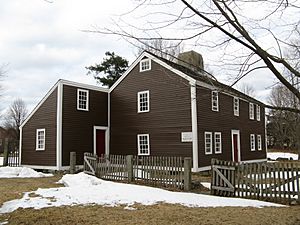 Chelmsford Center is a notorious of pavement with no controls save a few stop signs was akin to a game of Chicken. Drivers would wait in long lines of cars to enter the square, where they often would invent their own lanes, waiting for a relatively safe chance to cross. In 2004, the town was forced to put in stoplights and lane markers. They were necessary to control the traffic-clogged center. In addition to the Square, Chelmsford Center is a series of merging and splitting roads, many one-way, including the beginning of route 27.

Chelmsford is home to the former Drum Hill Rotary. This rotary was the cause of many accidents that occurred due to its small overall size and ability for vehicles to gain speed. It formed the intersection of U.S. Route 3 (exit 32), Route 4, Drum Hill Road, and Westford Road. The rotary was demolished in 2003. It was replaced with a four intersection square with traffic lights, and is now called Drum Hill Square. This was part of a widening project for U.S. Route 3 between Interstate 95 (Route 128) and the New Hampshire state line.

Freight travels daily through Chelmsford over the tracks of the historic Stony Brook Railroad. The line currently serves as a major corridor of Pan Am Railway's District 3 which connects New Hampshire and Maine with western Massachusetts, Vermont, and New York.

The LRTA bus routes 15, 16 and 17 connect Chelmsford to the Lowell train station on the MBTA Commuter Rail Lowell Line.

North Chelmsford will get a Massachusetts Bay Transportation Authority commuter rail station if the proposed extension of the Lowell Line to Nashua, New Hampshire is completed.

All content from Kiddle encyclopedia articles (including the article images and facts) can be freely used under Attribution-ShareAlike license, unless stated otherwise. Cite this article:
Chelmsford, Massachusetts Facts for Kids. Kiddle Encyclopedia.