Kids Encyclopedia Facts
This page is about the town. For the census-designated place, see Pepperell (CDP), Massachusetts.

Pepperell is a town in Middlesex County, Massachusetts, United States. The population was 11,604 at the 2020 census. It includes the village of East Pepperell. 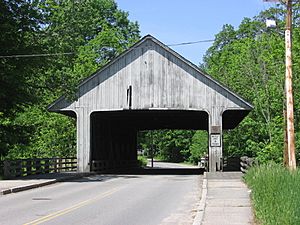 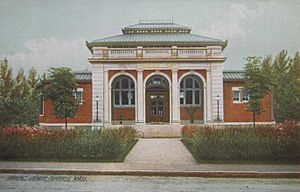 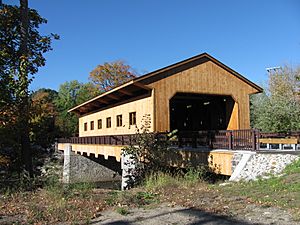 Pepperell was first settled in 1720 as a part of Groton, and was officially incorporated as its own town in 1775. The founders named it after Sir William Pepperrell, a Massachusetts colonial soldier who led the Siege of Louisbourg during King George's War. The town was noted for its good soil and orchards.

Since its formation, the town was active in the American independence movement. Being located northwest of Concord, Pepperell never saw British attack during the American Revolutionary War, though several Pepperell men fought at the Old North Bridge during the Battle of Concord, and a British spy was captured by women on guard at the site of the Pepperell covered bridge. Town resident William Prescott served as the commander at the Battle of Bunker Hill in what is now the Charlestown neighborhood of Boston.

By 1837, when the population was 1,586, Pepperell had three paper mills, one of which was managed by Warren F. Daniell. It also produced palm leaf hats, boots and shoes.

In 1848, the Worcester & Nashua Railroad built a line and train station in Pepperell along the Nashua River. In 1886 the line became part of the Boston & Maine Railroad, and continued to operate trains to Worcester and Nashua, as well as connections to Portland, Maine and beyond. In the midst of the Great Depression, the Pepperell stop was taken out of service in 1934, and the station was subsequently demolished. Freight trains continued to pass through Pepperell until 1981, and the tracks themselves were pulled up in 1984. In 2001, what had been the train path was paved over to become part of the Nashua River Rail Trail.

The town library, the Lawrence Library, was designed by architects Ernest Flagg and Walter B. Chambers, and built in 1901. On June 29, 2009 the people of Pepperell voted yes on a Proposition 2½ override, effectively saving operations of the Lawrence Library, Senior Center, and Community Center. The override helped fill a $1.3 million budget shortfall for fiscal year 2010.

One of only three covered bridges on public Massachusetts roads that is open to vehicular traffic (and the only one east of the Connecticut River) is located on Groton Street in Pepperell. The current bridge officially opened on July 30, 2010, replacing the aging Chester H. Waterous Bridge which was closed to vehicles on April 7, 2008 and demolished beginning July 30, 2008. It took two years to construct the new covered bridge.

Pepperell borders Brookline and Hollis, New Hampshire to the north, Dunstable to the east, Groton to the south, and Townsend to the west.

There were 3,847 households, out of which 44.2% had children under the age of 18 living with them, 65.5% were married couples living together, 9.6% had a female householder with no husband present, and 21.6% were non-families. Of all households 17.4% were made up of individuals, and 6.0% had someone living alone who was 65 years of age or older. The average household size was 2.89 and the average family size was 3.29.

All content from Kiddle encyclopedia articles (including the article images and facts) can be freely used under Attribution-ShareAlike license, unless stated otherwise. Cite this article:
Pepperell, Massachusetts Facts for Kids. Kiddle Encyclopedia.