Brookline is a town in Hillsborough County, New Hampshire, United States. The population was 5,639 at the 2020 census, up from 4,991 at the 2010 census. Brookline is home to the Talbot-Taylor Wildlife Sanctuary, Potanipo Pond, and the Brookline Covered Bridge. 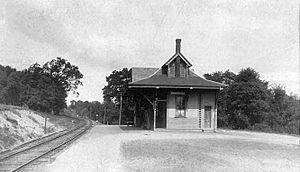 First a part of Dunstable, Massachusetts, then settled as West Hollis, New Hampshire, the town was granted in 1769 as "Raby". New Hampshire Governor John Wentworth named it after his cousin, the 4th Earl of Strafford and Baron of Raby Castle.

The town was renamed in 1798 at the suggestion of a leading citizen in town originally from Brookline, Massachusetts. By 1859, when the population was 718, there were eight sawmills and one gristmill, as well as a sash and blind shop. In the earlier days of the town, Brookline was known throughout southern New Hampshire for producing lumber, charcoal and casks. The Boston and Maine Railroad eventually branched into Brookline in 1892. The train station that served Brookline during the railroad's tenure in the town has since been renovated into a private residential home. A large fraction of the area that was once railroad track is now New Hampshire Route 13.

The town received national attention in 1997, when people participating in the traditional ringing of the Congregational Church bell at midnight on the Fourth of July were arrested. Several prominent members of the community were among those arrested, including Road Agent Clarence Farwell and his wife. The incident led to an investigation of the Brookline police department after questions of excessive force were raised following the arrests.

Brookline is drained by the Nissitissit River and Spaulding Brook. The 10-mile-long (16 km) Nissitissit is known for its abundance of trout. The Nissitissit begins at the outlet of Potanipo Pond, 1⁄2 mile (0.8 km) west of the town center. Brookline lies within the Merrimack River watershed.

Brookline is bordered by Mason to the west, Milford to the north, Hollis to the east, and Townsend and Pepperell, Massachusetts to the south. It is about 12 miles (19 km) west of Nashua and approximately 50 miles (80 km) northwest of Boston, Massachusetts. 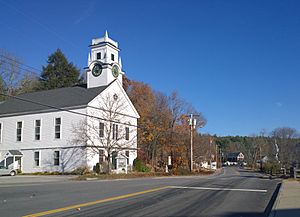 There were 1,343 households, out of which 51.9% had children under the age of 18 living with them, 76.7% were married couples living together, 5.7% had a female householder with no husband present, and 14.6% were non-families. 10.6% of all households were made up of individuals, and 3.1% had someone living alone who was 65 years of age or older. The average household size was 3.11 and the average family size was 3.36.

The Brookline selectboard chartered the town's Economic Development Committee (EDC) to "promote balanced, long-term economic development, which reflects and enhances the character of the community." The EDC publishes a newsletter three or four times a year to promote local businesses.

The Brookliner has been published biweekly since 1966.

Brookline is home to a thriving K–6 grade school system. Richard Maghakian Memorial School, an elementary school for grades K–3, and Captain Samuel Douglass Academy, which caters to children in grades 4–6, strive to provide a traditional education for its students focusing on STEM and the Arts to provide solidly based education.

All content from Kiddle encyclopedia articles (including the article images and facts) can be freely used under Attribution-ShareAlike license, unless stated otherwise. Cite this article:
Brookline, New Hampshire Facts for Kids. Kiddle Encyclopedia.