Clinton is a town in Worcester County, Massachusetts, United States. The population was 13,606 at the 2010 census. 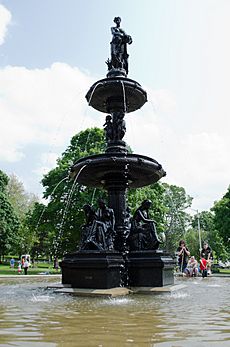 Clinton was first settled in 1654 as a part of Lancaster. It was officially incorporated as a separate town on March 14, 1850, and named after the DeWitt Clinton Hotel in New York, a favorite place of the town's founders, Erastus Brigham Bigelow and his brother Horatio.

Clinton became an industrialized mill town, using the Nashua River as a source for water power. In 1897, construction began on the Wachusett Dam, culminating in the filling of the Wachusett Reservoir in 1908. This flooded a substantial portion of Clinton and neighboring towns, which had to be relocated. A noteworthy feature of the Boston metropolitan public water service was begun in 1896 in the Wachusett lake reservoir at Clinton. The basin excavated there by ten years of labour, lying 385 ft. above high-tide level of Boston harbour, had a capacity of 63,068,000,000 gallons of water and was the largest municipal reservoir in the world in 1911, yet was only part of a system planned for the service of the greater metropolitan area.

Part of the Central Massachusetts Railroad line abandoned in 1958 includes a tunnel near Clamshell Road. Railroads came to the town to serve this industry, including the Boston, Clinton, Fitchburg and New Bedford Railroad (Fitchburg Branch of the Old Colony Railroad), the Central Massachusetts Railroad, and the Worcester, Nashua and Rochester Railroad (the last two later merged into the Boston and Maine Railroad). By 1890, Clinton was noted for its manufacturing of carpets and woven wire.

Clinton claims to have the oldest continuously-used baseball field in the world, Fuller Field, created in 1878. This challenges the claim by London, Ontario, which argues for Labatt Memorial Park, established as Tecumseh Park in 1877. This is disputed by Clinton because the London field has been flooded and rebuilt twice, including a reorientation of the bases, and there is doubt Tecumseh Field was in continuous use after the 1883 flood.

Clinton is bordered by Lancaster to the north, Bolton to the northeast, Berlin to the east, Boylston to the south, and Sterling to the west.

The racial makeup of the town was 88.20% White, 2.58% Black or African American, 0.22% Native American, 0.89% Asian, 0.04% Pacific Islander, 5.95% from other races, and 2.13% from two or more races. Hispanic or Latino of any race was 11.60% of the population. Ethnic heritages include Irish, Scottish, German, Québécois, Acadian, Swedish, Italian, Dominican, Puerto Rican, Mexican, Greek, and Polish. Many emigrants from the Louisburgh area of County Mayo settled in the small town in the early 1900s, giving Clinton a mainly Irish population till this day.

There were 5,597 households out of which 28.1% had children under the age of 18 living with them, 43.7% were married couples living together, 12.7% had a female householder with no husband present, and 39.3% were non-families. 33.1% of all households were made up of individuals and 12.4% had someone living alone who was 65 years of age or older. The average household size was 2.38 and the average family size was 3.06.

All content from Kiddle encyclopedia articles (including the article images and facts) can be freely used under Attribution-ShareAlike license, unless stated otherwise. Cite this article:
Clinton, Massachusetts Facts for Kids. Kiddle Encyclopedia.