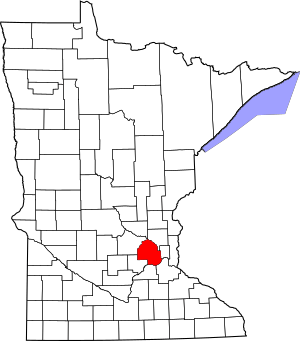 Location of Hennepin County in Minnesota

This list is of the properties and historic districts that are designated on the National Register of Historic Places, as well as a list of those that were formerly designated, in Hennepin County, Minnesota; there are 166 entries as of August 2016. A significant number of these properties are a result of the establishment of Fort Snelling, the development of water power at Saint Anthony Falls, and the thriving city of Minneapolis that developed around the falls. Many historic sites outside the Minneapolis city limits are associated with pioneers who established missions, farms, and schools in areas that are now suburbs in that metropolitan area. 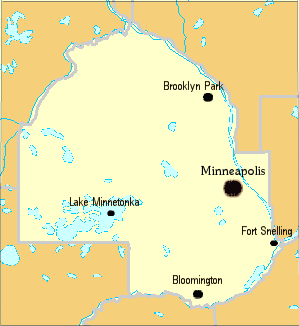 Father Louis Hennepin was the first European explorer to visit and name Saint Anthony Falls, the tallest waterfall on the Mississippi River, in 1680. While the falls were familiar to the Ojibwe and Sioux Indians who lived in the area, Father Hennepin spread word of the falls when he returned to France in 1683. The land east of the Mississippi came under England's control in 1763, and then became American territory after the American Revolutionary War in 1783. After the Louisiana Purchase in 1803, the western side of the falls became American territory as well.

Zebulon Pike explored the Mississippi River in 1805 and made a treaty with the Sioux to acquire land on either side of the Mississippi River from its confluence with the Minnesota River to Saint Anthony Falls. The United States did not do much to occupy the land until 1819, when Lieutenant Colonel Henry Leavenworth was ordered to establish a military post in the area. The following year, Colonel Josiah Snelling established a permanent fort at a blufftop site overlooking Pike Island and the confluence of the Mississippi and Minnesota Rivers. The fort, first named Fort Saint Anthony and later Fort Snelling, became an island of civilization in the wilderness.

Eventually, flour mills overtook sawmills as a dominant industry at the falls. In 1860, flour production stood at 30,000 barrels; it reached 256,100 barrels in 1869. By 1874, Charles A. Pillsbury and Company owned five mills at the falls, and in 1879, Washburn-Crosby Company (now General Mills) owned four mills. The former Washburn "A" Mill building on the west side of the falls exploded on May 2, 1878, but its owners quickly rebuilt the west side district, including a new, larger Washburn "A" Mill. Meanwhile, in 1880, Pillsbury began building the huge Pillsbury "A" Mill on the east side of the falls. It had a capacity of 4,000 barrels per day when it first opened. Improvements in milling technology made it possible to grind the tougher spring wheat into a finer product, producing Minnesota "patent" flour, the finest bread flour in the world at that time. By 1900, Minneapolis was grinding 14.1 percent of the world's grain.

All content from Kiddle encyclopedia articles (including the article images and facts) can be freely used under Attribution-ShareAlike license, unless stated otherwise. Cite this article:
National Register of Historic Places listings in Hennepin County, Minnesota Facts for Kids. Kiddle Encyclopedia.