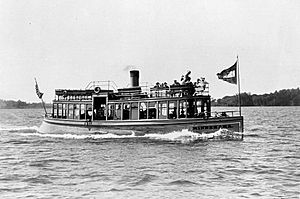 Minnehaha on Lake Minnetonka in 1906.

Minnehaha was built by the Twin City Rapid Transit Company (TCRT) in 1906 and provided fast and reliable transportation for the residents of Lake Minnetonka during much of the early twentieth century. She ran alongside five identical sister vessels named Como, Harriet, Hopkins, Stillwater, and White Bear. TCRT had commissioned boat builder Royal C. Moore to design these "Express Boats" in 1905. Each were 70 feet (21 m) long, 14 feet 10 inches (5 m) wide, drew 5 feet 7 inches (2 m) of water, and were powered by a single coal-fired boiler and triple-expansion steam engine. The sleek, launch-style hull of the craft, modern for the time, made the boats exceptionally stable and efficient as they cut through the water at a cruising speed of approximately 12 miles per hour (19 km/h). Parts and materials for the boats were prefabricated at Moore Boat Works in Wayzata and assembled at the TCRT streetcar shop in south Minneapolis. From there the finished craft were transported via railroad flatcar to Excelsior and launched into Lake Minnetonka.

Express Boat service first began on May 25, 1906 from Minnetonka Beach. Later that year a streetcar transfer terminal was completed in Excelsior, and all routes (four in total) embarked and disembarked from there. The primary function assigned to the Express Boats was to provide fast and reliable transportation for the seasonal residents of Lake Minnetonka who commuted to work in Minneapolis and Saint Paul. The boats stopped at 26 designated landings around the lake and, if flagged down, at suitable private docks. Since the boats were essentially an extension of TCRT's streetcar system, they were painted in the same color scheme as the company's streetcars (yellow and maroon) and were furnished with many of the same fittings. Several nicknames developed for the vessels as time passed. These included "yellow jackets" and the more popular term "streetcar boats."

The streetcar boats proved to be very successful and economically solvent for many years. A seventh vessel named Excelsior was added to the fleet in 1915 because of high ridership. However, ridership plummeted when roads were improved around Lake Minnetonka in the early 1920s. TCRT made cuts to steamboat service after 1921 and discontinued all steamboat service on Lake Minnetonka in 1926. Three of the streetcar boats were scuttled that summer, including Minnehaha. Three others were scrapped. One of the vessels, the Hopkins, was sold to a private entity and used as an excursion boat until it, too, was scuttled in 1949. 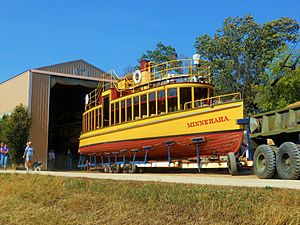 The restored Minnehaha in dry dock.

In 1979 a diver named Jerry Provost located the wreck of Minnehaha on the bottom of Lake Minnetonka. One year later, Provost and his underwater construction company raised Minnehaha to the surface with the enthusiastic vision of restoring and perhaps returning her to passenger service. However, due to a set of legal circumstances, Minnehaha sat in dry dock for 10 subsequent years. After much litigation, ownership of the vessel was ultimately transferred to the Steamboat Division of the Minnesota Transportation Museum in 1990, and a complete restoration effort was begun. The project, which cost approximately $500,000, continued for six years. Minnehaha finally returned to passenger service on May 25, 1996, and operated on Lake Minnetonka as an excursion vessel until 2019.

Minnehaha is currently owned and operated by the Museum of Lake Minnetonka (MLM), a 501(c)(3) nonprofit, all-volunteer organization based in Excelsior, Minnesota. The MLM formed during a restructuring of the Minnesota Transportation Museum (MTM) in 2004 and is no longer associated with the former organization. The MLM operated Minnehaha as an excursion vessel out of the communities of Excelsior and Wayzata until 2019. As of 2020, Minnehaha is temporarily out of service while the MLM seeks a permanent home to store and launch the vessel.

All content from Kiddle encyclopedia articles (including the article images and facts) can be freely used under Attribution-ShareAlike license, unless stated otherwise. Cite this article:
Minnehaha (steamboat) Facts for Kids. Kiddle Encyclopedia.