MTM operates several heritage transportation sites in Minnesota and one in Wisconsin. The museum is actively involved in preserving local railroad, bus and streetcar history.

MTM was formed in 1962 to save a streetcar that had been built and operated by Twin City Rapid Transit (TCRT) in Minneapolis–St. Paul. Many of the museum's early members were formerly part of the Minnesota Railfans Association, which had organized railfan trips from the 1940s to the 1960s.

In 2004–2005, the organization's streetcar operations became the Minnesota Streetcar Museum, with the steamboat Minnehaha, originally built by TCRT in a style similar to its streetcars, becoming a major attraction of the Museum of Lake Minnetonka. 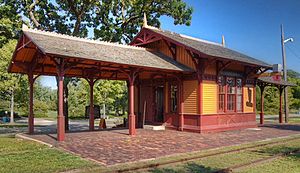 After the first streetcar, TCRT No. 1300, was successfully restored, other projects were examined in the time before the streetcar could be put on its own set of rails.

The Minnehaha Depot was a former Milwaukee Road depot at Minnehaha Falls. The station, built in 1875, was nicknamed "The Princess" because of its delicate architecture. The depot is a contributing property to the Minnehaha Historic District. Trains running on special routes have sometimes stopped at the station, and it was eventually integrated into the area streetcar system. Tracks owned by the Canadian Pacific Railway reach the station, though it is at the disused end of a rail spur.

The depot is owned by the Minnesota Historical Society and operated by the Minnesota Transportation Museum. In 1967, the depot became the first building to be restored by the museum and it was outfitted with exhibits. In 2004, the METRO Blue Line's Minnehaha Park station opened across the road from the old depot. 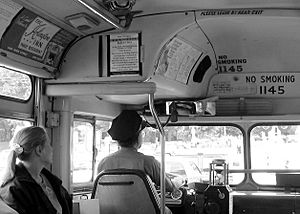 The Minnesota Transportation Museum pressed this classic General Motors bus back into service as part of the Blue Line light rail opening in June 2004. 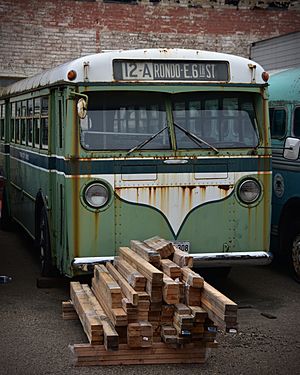 An older Mack bus behind the Jackson Street Roundhouse

Several buses from the 1940s and 1950s are also operated by the museum. Most equipment in the bus collection were built by the GMC division of General Motors, and represent vehicles that replaced the streetcars in the Twin Cities in the 1950s. The conversion from a streetcar to bus system required two years. The last trolley run was on Hennepin Avenue on June 18, 1954.

The collection consists of buses operated in and across Minnesota. Earliest is a 1942 Mack (occasionally used in conjunction with the Commemorative Air Force) which transported war workers to the B-24 final assembly point at what is now St Paul's Holman Field, and a block of 1953/54 GMC transit units, two of which are painted in original Twin Cities Lines colors. The buses are used in regular charter service, and form a very visible part of the museum's collection, often used in wedding and corporate charters, and on the museum's city tours.

This part of the collection is sponsored by Richfield Bus Company, graciously providing maintenance and licensing to operate them.

As the museum has acquired much of its bus collection from Metro Transit, the bus company sometimes requests the use of the old buses for special events.

Excursion trains operate from the historic Osceola Depot, north to Dresser, Wisconsin, and southbound to and through the scenic St. Croix River Valley. Regular schedules begin on the first weekend in May, continuing through the last week of October. Special Event trains operate through the season, including Mother's Day and Father's Day dining specials, the popular fireworks train to Marine on St. Croix, the Pumpkin Train (Halloween) and Fall Leaf Viewing trains through the River Valley.

At the Osceola service area, several locomotives and pieces of rolling stock are on display. All equipment has been reconditioned to standard operating condition, including classic 1920s open-window coaches, Great Northern express coaches and a refreshment car (Baggage car 265). Locomotives currently in running condition are classic diesel-electric.

In past years the classic steam engine, Northern Pacific No. 328 (4-6-0) was used to pull the trains, but has been placed in restoration status due to its age (107 yrs).

The Museum also operates the Dresser Depot at the northeast terminus of the line in Dresser, WI. The Depot has been preserved exactly as if the staff stepped out for a break, down to calendars and railroad notices. It is also the site of Pumpkin Train Park, hosting several thousand visitors during the pre-Halloween weekend. 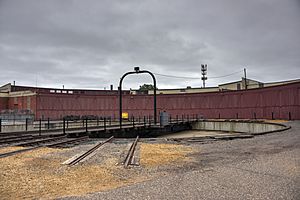 Turntable at the Jackson Street Roundhouse

The Jackson Street Roundhouse is MTM headquarters in St. Paul, as well as a fully functional railroad roundhouse, one of the last of its kind in the country. During winter months, the Roundhouse is a functioning work area for Museum rolling stock, often with the volunteer workforce welding, grinding and sending sparks flying.

Open Wednesday & Saturday, year-round, and on Friday during the summer months it is a maintenance & restorations base for the museum's locomotives and rolling stock. It is highly interactive, offering train rides (Saturdays) as well as hands-on exhibits about surface transportation history of Minnesota and the upper Midwest.

The building was erected by the Great Northern Railway in 1907, replacing another, older roundhouse. The site has been used for rail transportation since the first railroad came to Minnesota (1860s). The Roundhouse and surrounding grounds are a near complete display of American industrial history from the 19th century through the mid-20th century.

The Roundhouse is base for equipment as varied as Pullman coaches, Northern Pacific RR mail & baggage cars, an operating 115-foot (35 m) turntable, a 200-ton lifting crane, an F7A passenger engine (under long term restoration to operating status), a Brill Car (one of the last of its kind) and the Minnesota Transportation Museum's fleet of classic buses.

The roundhouse is also home to the famous Northern Pacific Railway steam engine No. 2156, known to many Twin Cities children as Casey Jones's steam engine, from the popular children's program "Lunch With Casey" starring Roger Awsumb as Casey Jones, in the 60's & 70's. No. 2156, currently torn down for restoration, is undergoing stabilization to become part of a "Steam Bay" exhibit, demonstrating the inner workings of steam locomotives. It will be displayed next to its sister engine No. 2153, restored cosmetically to original operating configuration.

All content from Kiddle encyclopedia articles (including the article images and facts) can be freely used under Attribution-ShareAlike license, unless stated otherwise. Cite this article:
Minnesota Transportation Museum Facts for Kids. Kiddle Encyclopedia.