Franklin Library is a public library on Franklin Avenue in Minneapolis, Minnesota, United States. The library was one of thirteen branch libraries established under the leadership of Gratia Countryman, the chief librarian of the Minneapolis Public Library from 1904 to 1936. The library housed the largest collection of Scandinavian books, newspapers, and magazines within the system, which reflected the population living in the area. The library was funded by the Carnegie Corporation and designed by Edward Lippincott Tilton, a New York City architect. 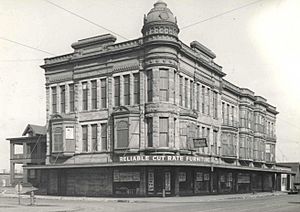 Location of South Side Branch

Andrew Carnegie donated money for library buildings as long as the community furnished the land to build the library upon. The McKnight family donated the land valued at $13,000 and Carnegie donated the building (valued at $41,000). The land was donated by Harriet McKnight Crosby, Caroline McKnight Christian and Sumner T. McKnight. The two story brick building soon became one of the busiest branches in the 1920s. The Scandinavian books and magazines drew users from throughout the library. As it is central with the Somali community today, Franklin Library has always been an immigrant library.

The Phillips neighborhood near Franklin has historically been the home of immigrants, Native Americans and African-Americans. The library has an American Indian collection and in the 1960s it started outreach to its neighbors, connecting them with social workers and resources.

The library is also home to the Franklin Learning Center, which was established in 1988. Franklin Learning Center serves adults who are studying English, math, science, social studies, technology and life skills, and preparing for the GED and U.S. citizenship exams. Learners work one-to-one or in small groups with instructors and volunteer tutors.

The library was listed on the National Register of Historic Places in 2000. In 2005, it was renovated to adapt to modern technology while maintaining its historic integrity.

Franklin and 14 other libraries of Minneapolis Public Library were merged into the combined urban/suburban Hennepin County Library in 2008.

Art in the library

Public art at the Franklin branch includes Robert DesJarlait's Red Lake, a large mosaic above the east fireplace. Hanging in the American Indian section of the library, DesJarlait's work honors the Anishinabe Ojibwe creation myth by incorporating the seven original clans within the Ojibwe nation, the Four Orders of Life, and the star, plant and animal worlds. DesJarlait, a member of the Anishinabe Ojibwe nation, uses pictographs to tell a story within his work, honoring the traditional ways of storytelling within the Native American community. Additionally, it honors the March 2005 death of ten people on the Red Lake Reservation in northwestern Minnesota.

A mosaic by Minneapolis native Marilyn Lindstrom sits above the west fireplace. Titled World Language, the piece celebrates the globe's seven continents by including petroglyphs, pictographs and ancient symbols from each. Lindstrom collaborated with DesJarlait in the creation of his work, Red Lake.

Franklin librarian Cassie Warholm-Wohlenhaus's article published on November 13, 2014, provides a concise and thorough history of the Franklin library's first 100 years. Today, the collection reflects the languages spoken in the homes of the community it serves, including Arabic, Ojibwe, Oromo, Somali, and Spanish.

During construction, the library used a building next door to provide continuity of service on a reduced capacity to patrons. This interim site's operating costs were funded by dedicated members of the community, Friends of Franklin, who worked alongside Friends of the Minneapolis Public Library, to raise over $250,000 to keep library services in the community during the remodeling. Renovation began in August 2003, and the library reopened in May 2005. Changes included restoration of an original skylight, an expanded area for children and a designated space for teens.

Reflecting the dynamic interests of the community, Franklin Library offers a broad variety of programming, including the Franklin Learning Center, established in 1988. The community's ongoing learning needs are met with the help of dedicated volunteers and librarians. Some need to learn or polish their English language skills. Others study for general enrichment, including math fluency, reading competency and vocabulary growth. Still others are studying for the exam to become a U.S. citizen.

The Franklin Teen Center supports the community's immigrant teens, helping them settle into life in Minneapolis through technology classes, academic support and instruction about life skills. Past programs have included tech workshops and a group tailored for Young Achievers. All teens can get help with homework at Franklin.

The Phillips Technology Center is a vibrant and specialized hub of learning in the neighborhood. Established in 1997, and located on the library's lower level, it provides free training for computer users and free access to technology. The center is an alliance made up of the Franklin Library, Minnesota Indian Women's Resource Center, Project for Pride in Living – Learning Center, and Waite House. Franklin Library's 4-H Mentoring Club, an Urban 4-H group, is an important organization and has included a performance celebrating Somali Independence Day among its programs.

All content from Kiddle encyclopedia articles (including the article images and facts) can be freely used under Attribution-ShareAlike license, unless stated otherwise. Cite this article:
Franklin Library (Minneapolis) Facts for Kids. Kiddle Encyclopedia.