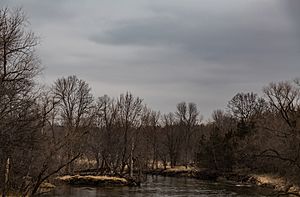 The Crow River is a tributary of the Mississippi River in south-central Minnesota in the United States. It drains a watershed of 2,756 square miles (7,140 km2).

The North Fork of the Crow River was named by the Ojibwe Indians for the bird they called the "marauder of newly planted corn."

The north and south forks converge at Rockford to form the Crow River, which flows for 24.8 miles (39.9 km) northeastward to the Mississippi River.

All content from Kiddle encyclopedia articles (including the article images and facts) can be freely used under Attribution-ShareAlike license, unless stated otherwise. Cite this article:
Crow River (Minnesota) Facts for Kids. Kiddle Encyclopedia.