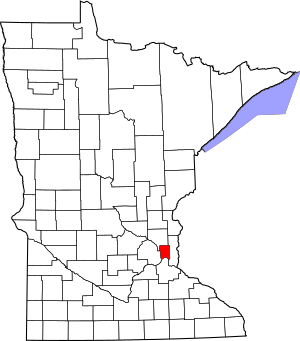 Location of Ramsey County in Minnesota 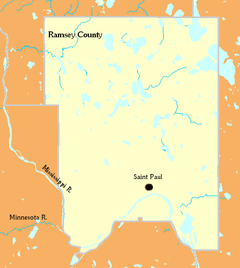 The county's historic places include houses, places of worship, commerce, and education, and community centers and infrastructure. Several districts encompass several structures of related historic significance. Some of the oldest structures in the state are in Ramsey County, representing the earliest of non-indigenous residents in the state. As the northernmost natural port on the Upper Mississippi River, Saint Paul grew, handling both river and rail freight and passenger traffic. Even as Minneapolis (in Hennepin County) eventually surpassed Saint Paul in the volume of commerce, Saint Paul remained relevant as the state capital and associated government services and employment kept the county growing. Several of the sites are specifically related to the various first-generation immigrant populations that made Ramsey County their new home in the United States, especially Germans, Czechs, Scandinavians, and Austro-Hungarians, which together comprised the majority of residents in the first century of the county's history.

All content from Kiddle encyclopedia articles (including the article images and facts) can be freely used under Attribution-ShareAlike license, unless stated otherwise. Cite this article:
National Register of Historic Places listings in Ramsey County, Minnesota Facts for Kids. Kiddle Encyclopedia.