The Harriet Island Pavilion, currently known as the Clarence W. Wigington Pavilion, is a park pavilion on Harriet Island just across the Mississippi River from downtown Saint Paul, Minnesota. It was designed by Clarence W. Wigington, the nation's first black municipal architect, and renamed for Wigington after a 2000 restoration. Harriet island was named for Harriet Bishop, a Baptist school teacher from Vermont. She arrived in Saint Paul in 1847, was involved in the temperance movement, and opened the first school in the frontier city, teaching children of diverse ethnic, racial, and religious backgrounds.

The park at Harriet Island was built by Dr. Justus Ohage, St. Paul's health officer, who donated the land to the city in 1900. His idea for the park was to build a place for healthy living in the center of the city. The park originally had a public bathhouse and beach, along with amenities like playgrounds, picnic grounds, handball and tennis courts, and a bandstand. The park was initially very popular, but pollution from the Mississippi River forced the bathhouse to close in 1919. The city made several attempts to revitalize the park, but none of the attempts was particularly successful until the Works Progress Administration built the pavilion in 1941-1942. The architecture combines Moderne design with classical influences.

The Kasota limestone used in the construction was salvaged from the former St. Paul City Hall-Ramsey County Courthouse, which was built in 1889 and demolished in 1933. 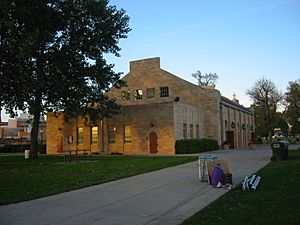 All content from Kiddle encyclopedia articles (including the article images and facts) can be freely used under Attribution-ShareAlike license, unless stated otherwise. Cite this article:
Harriet Island Pavilion Facts for Kids. Kiddle Encyclopedia.