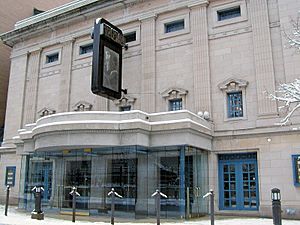 The Fitzgerald Theater is the oldest active theatre in Saint Paul, Minnesota. It is the home of American Public Media's A Prairie Home Companion. The theater is owned by Minnesota Public Radio. The Fitzgerald was also the location for the 2006 film of the same name.

It was built in 1910 at a cost of $165,000. It had a sandstone front and was of concrete and steel construction. The theatre had several very modern features for its time. It had 2,000 electric light bulbs. The stage could be lowered and raised by two feet. It had 16 dressing rooms and a side entrance for those arriving in automobiles. It was one of many theaters built by the Shubert Theatre Corporation. It was originally named the Sam S. Shubert Theater. The theatre was designed by the noted Chicago architectural firm of Marshall and Fox.

By 1933 it had fallen on hard times. Even the Broadway shows that played there could not make it profitable. That same year it was remodeled in the Art Deco style and renamed the World Theatre. It became a movie theatre and specialized in showing foreign films. By 1978 it was scheduled to be torn down. Minnesota Public Radio was looking for a new home for one of it's programs, A Prairie Home Companion. They were able to lease the theatre for a very reasonable price. It was placed on the National Register of Historic Places in 1984 as the Sam S. Shubert Theatre and Shubert Building. In 1985 it was decided the building was unsafe and was in danger of closing permanently. After raising nearly two million dollars, the building was once again renovated. In 1994 it was renamed after St. Paul native F. Scott Fitzgerald. 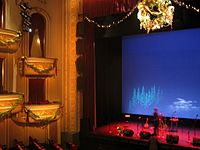 Interior of the Fitzgerald Theater

In 2005, the theater was used for filming the movie A Prairie Home Companion, directed by Robert Altman. Garrison Keillor, the star of the radio show also starred in the movie. He was instrumental in getting Hollywood stars such as Meryl Streep and Lily Tomlin for the movie.

The movie was shot digitally which allowed the cast and crew to fit into the small building. Even the theatre's basement was used for movie sets. With all the actors, technicians, electricians and carpenters squeezed into a small space, it was "as crowded as an ant farm". A Hollywood-style premiere was held at the Fitzgerald on 3 May 2006. A parade led from Rice Park to the theatre and the red carpet was laid out for the stars who arrived in white horse-drawn carriages.

All content from Kiddle encyclopedia articles (including the article images and facts) can be freely used under Attribution-ShareAlike license, unless stated otherwise. Cite this article:
Fitzgerald Theater Facts for Kids. Kiddle Encyclopedia.