Kids Encyclopedia Facts
This page is about the radio show. For the film, see A Prairie Home Companion (film). 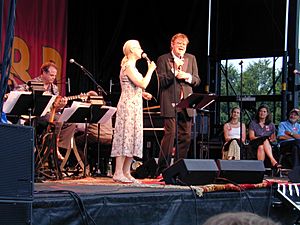 A Prairie Home Companion is a live radio variety show created and hosted by Garrison Keillor. The show runs on Saturdays from 5 to 7 pm Central Time. It is usually broadcast from the Fitzgerald Theater in Saint Paul, Minnesota. The program is also taken on the road. A Prairie Home Companion is known for its musical guests, especially folk and traditional musicians. It is also known for its tongue-in-cheek humor and Keillor's storytelling segment, "News from Lake Wobegon". 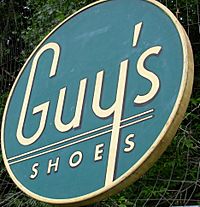 A Prairie Home Companion started as a morning show, running from 6 to 9 am on Minnesota Public Radio. The first program aired on 6 July 1974 before an audience of 12 people. The idea for the name came from a cemetery in Moorhead, Minnesota called the Prairie Home. It was located across the street from the radio station.

In April 1974, Keillor traveled to Nashville. This was the last broadcast of the Grand Ole Opry from the old Ryman Auditorium and Keillor was doing a story for The New Yorker Magazine. He decided to host a variety show based on that format on the radio. On July 6, 1974, the first live broadcast of A Prairie Home Companion took place.

In 1978, the show moved into the World Theater in Saint Paul, Minnesota. In 1987, he decided to move to Denmark with his new wife. He then moved to New York City. In 1989 he began a new show "The American Radio Company of the Air." The format was the same, but the program was geared to the New York audience. But after four seasons he moved back to Minnesota and brought back the Prairie Home Companion.

One of the show's best-known features is Keillor's "News from Lake Wobegon". This is a weekly storytelling monologue, claiming to be a report from Keillor's fictitious hometown of Lake Wobegon. The segment always begins with "It's been a quiet week in Lake Woebegone, my hometown." It almost always ends with "And that's the news from Lake Wobegon, where all the women are strong, all the men are good-looking, and all the children are above average."

Because the program is aired on public broadcasting radio, they are not allowed to have real advertisements. Instead, the show produces fictional advertisements for fictional products. The ads are performed in the style of live old-time radio commercials. The show is "sponsored" by fictitious products including "Powdermilk Biscuits", "Cafe Boeuf" and the "American Duct Tape Council".

All content from Kiddle encyclopedia articles (including the article images and facts) can be freely used under Attribution-ShareAlike license, unless stated otherwise. Cite this article:
A Prairie Home Companion Facts for Kids. Kiddle Encyclopedia.