Falcon Heights is the home of the University of Minnesota's St. Paul Campus and Les Bolstad Golf Course, the Minnesota State Fairgrounds, and the Gibbs Museum of Pioneer and Dakotah Life. Its University Grove neighborhood is known for its modern architecture.

Heman Gibbs settled in the 1850s near the modern intersection of Cleveland and Larpenteur Avenues. His homestead is on the National Register of Historic Places and his home is a county museum.

On September 2, 1901, then-Vice President Theodore Roosevelt first publicly used the African proverb "Speak softly and carry a big stick" in a speech at the Minnesota State Fairgrounds, which was still a part of St. Paul at the time. Roosevelt became president just two weeks later, upon the assassination of William McKinley, and built the phrase into his concept of Big Stick Diplomacy.

In the 1930s, a real estate agent named Faulkner developed land owned by a 3M executive and named this development—Falcon Heights—after himself. The first house arose in 1937. In the 1940s, Curtiss Field was an airport near the intersection of Snelling and Larpenteur. This land is now a city park named Curtiss Field.

In 1949 residents rejected annexation by Roseville or St. Paul, and voted to incorporate themselves. The expanded Falcon Heights included the University of Minnesota Golf Course and Test Fields as well as the Minnesota State Fairgrounds. Two-thirds of Falcon Heights is public land, chiefly the university and state fair. 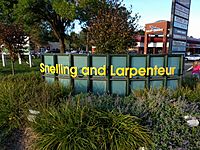 Corner of Snelling and Larpenteur Avenues

Minnesota Highway 51 / Snelling Avenue serves as a main route in the community.

Falcon Heights is bordered by Lauderdale to the west, St. Paul to the south and Roseville to the north and east. 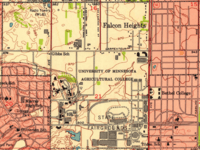 There were 2,131 households of which 26.8% had children under the age of 18 living with them, 48.7% were married couples living together, 7.6% had a female householder with no husband present, 2.7% had a male householder with no wife present, and 40.9% were non-families. 30.3% of all households were made up of individuals and 10% had someone living alone who was 65 years of age or older. The average household size was 2.28 and the average family size was 2.91.

The 2001 film Sugar & Spice was partly filmed in Falcon Heights.

A small part of the 1996 film Jingle All the Way starring Arnold Schwarzenegger was filmed at Falcon Heights Elementary.

All content from Kiddle encyclopedia articles (including the article images and facts) can be freely used under Attribution-ShareAlike license, unless stated otherwise. Cite this article:
Falcon Heights, Minnesota Facts for Kids. Kiddle Encyclopedia.