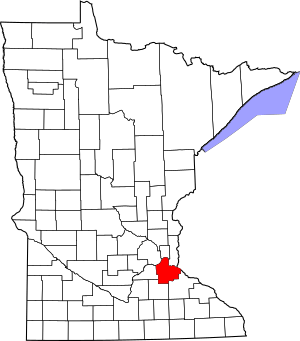 Location of Dakota County in Minnesota

Dakota County's historic sites convey the county's significant historical trends, including the settlement at Mendota, the homes of well-heeled residents of Hastings, the ethnic gathering places in South Saint Paul, and other sites related to life on the prairie, including religion, education, transportation, commerce, and the business of farming. 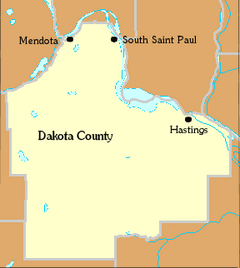 The earliest European settlement occurred on what is now Picnic Island, in 1819, where Colonel Henry Leavenworth built a stockade fort called "St. Peter's Cantonment" or "New Hope;" there materials were assembled for the construction of Fort Snelling, to be built on the bluff on the north side of the Minnesota River. Permanent settlement on the island was impossible due to annual flooding.

The next significant white settlement occurred in the area known as St. Peters, now Mendota, where Alexis Bailey built some log buildings to trade in furs in 1826. Henry Hastings Sibley built the first stone house in Minnesota there in 1836, overlooking Fort Snelling across the river. Sibley was a partner in the American Fur Company, and considerable fur trade occurred at Mendota, where the Mississippi and Minnesota Rivers converge. By the time Minnesota achieved statehood in 1858, power and influence had shifted from Mendota, across the rivers to Saint Paul and Minneapolis.

By this time and continuing into the 20th century, the hub of activity in the county was in Hastings, the county seat, and a focal point of transportation, communication, and commerce. Hastings is critically located on the Mississippi River at the confluence of the St. Croix River and on the Vermillion River, which provided ample water power. Commercial interests built substantial wealth among the businessmen who dealt in lumber, milling, and railroads as the county residents depended on them to sell their agricultural products and to provide the goods needed for a growing economy and rising standard of living.

Into the early twentieth century, the stockyards and meat-packing plants in South Saint Paul became historically significant, as they were the largest stockyards in the world; this is where ranchers in the vast countryside to the west brought their livestock for shipping to the hungry populations of St. Louis, Memphis, and New Orleans, downstream. These plants were worked by new immigrants from Romania, Serbia, and other Eastern European countries.

All content from Kiddle encyclopedia articles (including the article images and facts) can be freely used under Attribution-ShareAlike license, unless stated otherwise. Cite this article:
National Register of Historic Places listings in Dakota County, Minnesota Facts for Kids. Kiddle Encyclopedia.