Burnsville is a city 15 miles (24 km) south of downtown Minneapolis in Dakota County in the State of Minnesota. The city lies on the south bank of the Minnesota River, upstream from its confluence with the Mississippi River. Burnsville and nearby suburbs form the southern portion of Minneapolis–Saint Paul, the fifteenth largest metropolitan area in the United States, with about 3.6 million residents. According to the 2010 census, the population is 61,481.

Originally a rural Irish farming community, Burnsville became the tenth largest city in Minnesota in the 2000 Census following the construction of Interstate 35. Currently the ninth largest suburb in the metro area and a bedroom community of both Minneapolis and Saint Paul, the city was fully built by the late 2000s. Burnsville's downtown area is called Heart of the City with urban-style retail and condominiums. The Burnsville Transit Station serves as the hub and headquarters of the Minnesota Valley Transit Authority, providing regional bus service to five other suburbs.

The name Burnsville is attributed to an early Irish settler and land owner, William Byrne. His surname was recorded as "Burns" and was never corrected.

The Mdewakanton Dakota were the earliest inhabitants who came through the Minnesota River, following water fowl and game animals. As part of the greater migration of the Mdewakanton from their ancestral area around Mille Lacs Lake to the river confluence of the Minnesota and Mississippi Rivers, Chief Black Dog, around 1750, established his band at a permanent village at the isthmus between Black Dog Lake (from which is named after him) and the Minnesota River, near the present site of the Black Dog Power Plant. The permanent camp was reported by early settlers as being inhabited by over 250 Dakota. At the south end of Burnsville, Crystal Lake, recorded as "Minne Elk" was utilized for abundant fish, leisure and burial. It was also a gathering spot where Dakota watched deer or bucks drink at the lake from the top of Buck Hill, in which was named by early settlers who witnessed this activity. Three large burial mounds were discovered after European settlement. 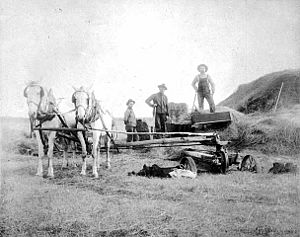 The Dakota nation ceded land in 1851 and many relocated to Chief Shakopee's village—the current Shakopee-Mdewakanton Indian Reservation in nearby Prior Lake. The first European settlers were Irish, Scottish and Norwegian farmers who came upriver from Saint Paul. One of these Irish settlers was William Byrne, who had immigrated in 1840 from County Kilkenny, Ireland to Hamilton, Ontario, Canada. In 1855, he settled at the present day junction of County Road 34 and Judicial Road near the Scott County line, just southeast of old downtown Savage. He subsequently donated land there for a church, school, and a cemetery as well as serving Town Chairman. In 1858, the Dakota County Board authorized Byrnsville Township in the north by the Minnesota River, east by Eagan and Apple Valley, south by Lakeville, and west by Scott County. There is some ambiguity of if the name actually derived from William Byrne since there were people with the surname "Burns" living in the area (a Scottish variant). The Town Clerk recorded variations between "Burns" and "Byrnes" but at the 1960s city incorporation, the "Burnsville" spelling prevailed. The school district was organized during this time as well. Burnsville originally comprised the present-day downtown of Savage (then known as Hamilton) until county border revisions by the legislature. The Irish and Scottish settlers of this time left their names on many area roads and parks and their religion in Presbyterian, Protestant, and Catholic churches. 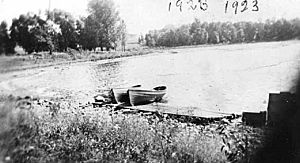 Lewis Judd established the Lakeside Hotel on the north shore of Crystal Lake in 1880. The resort included boats for rent.

In the 19th century, Burnsville was considered a long distance from downtown Minneapolis. Rail access came in 1864 and Burnsville became a resort town, with cottages along Crystal Lake as well as Orchard Lake and Marion Lake in nearby Lakeville. The Bloomington Ferry provided river crossings until 1889 when the original Bloomington Ferry Bridge was built. By 1920, the Lyndale Avenue Drawbridge opened next to Black Dog Lake, extending Minneapolis' first north south highway to the rural communities of southern Minnesota. Later the bridge, upgraded several times, would be replaced by the I-35W Minnesota River bridge. In 1950, just before the World War II postwar housing boom, Burnsville was still a quiet township with a population of 583 people. School was taught in a one-room schoolhouse containing eight grades.

After the arrival of Interstate 35W in 1960, the next two decades saw the largest boom in population when post-war pressures forced the community to develop at rapid pace. Byrnesville Township was officially incorporated in 1964 after defeating an annexation attempt by the city of Bloomington. Mass housing development followed and a former mayor, Connie Morrison said city managers had foresight in producing shopping nodes in walking distance of most homes. The city became a regional pull when Burnsville Center opened in 1977 and produced the heavily traveled retail strip on County Road 42. The next decades leading to the 21st century dealt with managing Burnsville's increasing population and growth which led to providing alternative transportation options, diverse housing projects, and ultimately the "Heart of the City" project. The city approached build-out in the late 1990s and changed focus from new development to redevelopment and rehabilitation of existing structures.

Descendants of the Byrne family still remain in greater Minnesota with the original spelling in their surname. A relative who dedicated William Byrne Elementary in the 1960s considered petitioning to correct the spelling but most of the family had moved away for several decades.

Fed by receding glaciers and Lake Agassiz 12,000 years ago, the Glacial River Warren carved today's Minnesota River valley. On the northern border of Burnsville, the Minnesota River winds through marshland and flood plains toward its confluence with the Mississippi. Most of the river is in the Minnesota Valley National Wildlife Refuge with fish, wildlife, and parkland managed collectively by the U.S. Fish and Wildlife Service and the Minnesota Department of Natural Resources. Burnsville also contains the Black Dog and Lower Minnesota River Watershed Districts managed by the Dakota County Soil and Water Conservation District.

The earliest settlers were roughly 250 Mdewakanton Dakota who lived permanently at Black Dog camp. Starting in the 1850s, Old stock Americans from the east coast and French Canadians moved into eastern Dakota County near Saint Paul. A decade later, major European immigration began with settlers from Ireland, Scotland, and Great Britain. By the 1900s there were a few Scandinavians from Sweden, Norway, and Denmark but these ethnic groups were mostly concentrated towards Lakeville. Those from Germany and Eastern Europe would gradually join the minority from the packing jobs in nearby South St. Paul. Irish descendants maintained the majority through the early 1950s owing to the town's origin, overall land ownership, and the practice of marrying within ethnic clans. The early 20th century's permanent population remained very low as the Minnesota River's lack of bridges and streetcar connection isolated the area from development, preventing people from moving south of the river. The lake-side houses around Crystal Lake and Orchard Lake however attracted several various immigrant and first-generation wealthier individuals to temporarily settle or own land in the town limits.

In 1960, the U.S. Census Bureau recorded the population of Byrnesville Township at 2,716 people and soon after, the postwar growth was instantaneous, filling the city with second to third generation European descendants from Minneapolis; more American than ethnic. From 1960 to 1970, the total population accelerated to nearly 20,000 people and by the year 2000, the population arrived at roughly 60,000 people.

There were 24,283 households of which 32.1% had children under the age of 18 living with them, 48.4% were married couples living together, 11.5% had a female householder with no husband present, 4.6% had a male householder with no wife present, and 35.5% were non-families. 27.6% of all households were made up of individuals and 8% had someone living alone who was 65 years of age or older. The average household size was 2.47 and the average family size was 3.03.

The Ames Performing Arts Center is located at 12600 Nicollet Avenue in the Heart of the City. The center has two theatres, a 1000-seat Proscenium Stage and an intimate 150 seat Black Box. The lobby is two stories tall, all glass, with a sweeping view of Nicollet Commons Park, the Minnesota River Valley, and the Minneapolis skyline. The art gallery currently holds eight gallery exhibits every calendar year in its 2,000-square-foot (190 m2) space. The art mission is to celebrate the visual arts by displaying a diverse collection of artwork from local emerging and professional artists. In addition to the theaters and art gallery, there are meeting rooms and a large rehearsal room. Presentations at the Ames Center range from classical music to comedy, from jazz to Christian rock, from country to rock and roll. There are dramas, comedies, local arts organizations and national touring artists. Additional space is available for banquets, special events and receptions.

While the city doesn't have museums, it does operate the sole major arts institution, the Lake Alimagnet Center for the Arts in eastern Burnsville next to Lake Alimagnet, which provides community space for arts and non-profit groups. Burnsville is a regional leader in youth and teen activities. THE GARAGE Youth Center located near City Hall is a non-profit music club and teen center which has attracted music acts nationally and internationally.

Annually every August or September, the community holds the Burnsville Fire Muster. Established in 1980, the event originated in the 1970s as a showcase and short parade for a local fire equipment collector. Taking on the New England fire muster tradition, the event now includes a large parade, music concerts, and fireworks. In 2004, the namesake event of this celebration, a fire truck parade, was cited by the Guinness Book of World Records as the longest of its kind in the world, at that time. 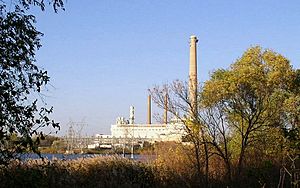 The city contains 1,800 acres (7.3 km2) of parkland spread throughout 79 parks and is managed by the Burnsville Parks Department which follows a Parks & Trails Master Plan. Only a third is developed and for recreation with the remainder preserved as natural habitat. Burnsville north border with the Minnesota River is within the Minnesota Valley National Wildlife Refuge. Crystal Lake is the city's major recreation lake allowing boating, fishing, jet-skiing, and swimming. The Burnsville Skate Park is a free facility during summer hours. The Burnsville Ice Center has two large professional ice rinks.

The Burnsville Athletic Club is an all-volunteer youth sports league. It has an annual participation of nearly 1,300 players in the baseball leagues for grades K-12, 80–90 boys basketball teams in grades 3–12, and over 400 players in flag and tackle American football in grades 2–8. There are also traveling teams for boys' and girls' basketball, girls' fast pitch softball, and 8th grade boys football, which play against similar teams from around the state at a higher competitive level. Other adult sports are provided through the city's recreation department, other recreational organizations, and minor league groups.

Minnesota Valley Transit Authority provides regional bus service between many transit hubs within the city, south of the river, and to destinations such as the Mall of America, Downtown Minneapolis, and Southdale Mall. Most residents commute and move around by car. Burnsville contains the Interstate Highway 35 split with Interstate Highway 35W leading to downtown Minneapolis and Interstate Highway 35E to downtown St. Paul. The major on and off-ramps for I-35W are located at Burnsville Parkway, County Road 42, and State Highway 13. County Road 42 and State Highway 13 both provide east–west access to the western suburb of Savage and the eastern suburbs of Eagan and Apple Valley. Major interior arteries include Nicollet Avenue, McAndrews Road (East 138th Street), County Road 5 (Kenwood Trail), County Road 11, Portland Avenue, Southcross Drive, and Lac Lavon Drive.

All content from Kiddle encyclopedia articles (including the article images and facts) can be freely used under Attribution-ShareAlike license, unless stated otherwise. Cite this article:
Burnsville, Minnesota Facts for Kids. Kiddle Encyclopedia.