Savage is a suburban city 15 miles (24 km) south-southwest of downtown Minneapolis in Scott County in the State of Minnesota. The city is on the south bank of the Minnesota River in a region commonly called South of the River, comprising the southern portion of Minneapolis-St. Paul, the 16th-largest metropolitan area in the United States. The population of Savage was 32,465 at the 2020 census.

Minnesota State Highway 13 and County Road 42 are two of the main routes in Savage. Interstate 35W and U.S. Highway 169 are in close proximity to the city.

The landing point for Irish and Scottish immigrants in 1800, Savage has grown into a developing bedroom community, absorbing population growth from Burnsville, its larger neighbor to the east. Once a shipbuilding port for the U.S. Navy, Savage is now an industrial manufacturing job center in the southern metro. The city is still relatively undeveloped, with sections of the Minnesota Valley National Wildlife Refuge and Murphy-Hanrehan Park Reserve within its borders.

Previously named Hamilton after the city in Ontario, Canada, the town was renamed Savage after Marion Willis Savage, who owned and trained the nationally celebrated racing horse Dan Patch.

In 1852, traders established a small post at the confluence of the Credit River and the Minnesota River. William Byrne, who immigrated from County Kilkenny, Ireland to Hamilton, Ontario, Canada in 1840, arrived in the area shortly after, via steamboat from Fort Snelling. Already established in business and trade, he and other Irish and Scottish settlers build Hamilton Landing, a port for boats, named after the city he immigrated to in Canada. The town incorporated in 1892 as the village of Hamilton. Byrne later settled another nearby area which became Burnsville.

The Chicago Northwestern (present day Union Pacific Railroad) railway line reached the site in 1865, and in 1866 the town gained a post office. Hamilton became the crossroads of trade and service in the region with the Credit River, Minnesota River, the valley's wagon and road trails, and the rail line.

The post office was later renamed Glendale Post Station in 1894 and formed Glendale Township to the west of Hamilton but was later consolidated with Savage in 1969. The roughly 17 blocks of the late 19th-century town remain as Savage's downtown along Highway 13 (Minnesota).

In 1902, Minneapolis entrepreneur Marion Willis Savage purchased racing horse Dan Patch and trained and raced him at his farm in the limits of Hamilton. Dan Patch's notoriety grew as the horse began breaking speed records and with it the prestige of the town. In 1904 the townspeople renamed the community after Savage with the post office officially confirming. In 1906 at the Minnesota State Fair, Dan Patch broke the world pacing mile record at 1 minute and 55 seconds, a record that remained unsurpassed for 54 years.

During World War II, Savage was home to Camp Savage, a Military Intelligence School (MIS) language program, which taught Japanese to American military personnel. Established in 1942, the school trained with niseis and improved military intelligence of the time. It was later relocated to Fort Snelling and the camp is commemorated at Normandale College's Japanese garden. At about the same time, Cargill, Incorporated, began building ships for the U.S. Navy at the newly constructed Meadowland Shipyard,renamed Port Cargill (former site of Hamilton Landing). To launch the ships, 14 miles (23 km) of the Minnesota River were dredged down to 9 feet (2.7 m) from Savage to the Mississippi River confluence. About 3,500 people were employed during peak production resulting in 18 auxiliary oil and gas carriers and 4 tugboats constructed. After World War II the port began shipping agricultural commodities. 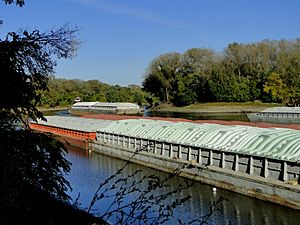 The towboat J.L. Fleming brings empty grain barges into Port Cargill on the Minnesota River, a tributary of the Mississippi River.

Savage remained undeveloped in the post-war housing boom, isolated by the Minnesota River and without a direct interstate connection. Lack of available construction materials in the immediate area also prevented development. By the 1980s, with the upgrade of Highway 13 and construction of the Highway 169 Bloomington Ferry Bridge in 1996 across the Minnesota River, Savage's population finally boomed as one of the growing exurb cities with low cost greenfield land in the metropolitan area. The citizens of Savage reclaimed some of their history in the early 21st century, when it relocated the displaced Savage Depot built in 1880 by the then Chicago, Minneapolis and Omaha Rail Road.

There were 9,116 households, of which 47.6% had children under the age of 18 living with them, 66.3% were married couples living together, 8.2% had a female householder with no husband present, 4.7% had a male householder with no wife present, and 20.8% were non-families. 14.8% of all households were made up of individuals, and 3.2% had someone living alone who was 65 years of age or older. The average household size was 2.95 and the average family size was 3.31.

All content from Kiddle encyclopedia articles (including the article images and facts) can be freely used under Attribution-ShareAlike license, unless stated otherwise. Cite this article:
Savage, Minnesota Facts for Kids. Kiddle Encyclopedia.