The Minneapolis Armory is an 8,400-person capacity music and events venue located at 500 South 6th St. in Downtown Minneapolis, Minnesota, United States. The Armory was built for the Minnesota National Guard in 1935–36 and also used by the Minneapolis Lakers of the NBA from 1947-1960. It was listed on the National Register of Historic Places in 1985.

In 2015, the Armory was purchased by a local development firm for $6 million. The building was converted from a parking facility to an 8,400-capacity events center and concert venue. It reopened in January 2018 in time to host several events related to Super Bowl LII.

The armory was the costliest single building in Minnesota supported by a Public Works Administration grant. The building is an example of the PWA Moderne style, a design characterized by strong geometry, bold contouring and integrated sculpture ornamentation. The building was designed by St. Paul architect P.C. Bettenburg, who was also a major in the Minnesota National Guard. St. Paul artist Elsa Jemne painted murals in the building.

From the late 1930s through the 1970s, it was a venue for civic events, including concerts, political conventions and sporting events such as Golden Gloves tournaments. The building was used by the Minneapolis Lakers of the National Basketball Association as a part-time home between 1947–1959, and as its primary home court for the 1959–60 NBA season. Professional motorcycle racing took place inside the Armory during the winter months from 1968 through 1980. The National Guard was still operating at the armory in 1985. 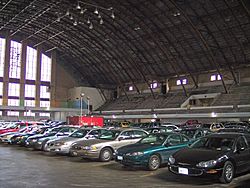 The interior of the Minneapolis Armory in 2006, during its incarnation as a parking structure

Hennepin County bought the armory in 1989 for $4.7 million, with plans to place a new county jail on the site. The Minnesota Historical Society sued to stop its destruction and in 1993, the Minnesota Supreme Court ruled that the structure was protected by state law and could not be torn down because of its historical status. In 1998, the county sold the building for $2.6 million to a private company for use as a parking structure on condition that it be preserved.

All content from Kiddle encyclopedia articles (including the article images and facts) can be freely used under Attribution-ShareAlike license, unless stated otherwise. Cite this article:
Minneapolis Armory Facts for Kids. Kiddle Encyclopedia.