Longfellow is a defined community in Minneapolis, Minnesota which includes five smaller neighborhoods inside of it: Cooper, Hiawatha, Howe, Seward, and Longfellow. Grouped with South Minneapolis between the city's eastern border with the Mississippi River and the Metro Blue Line , Longfellow takes its name from Longfellow neighborhood which in turn is named after Henry Wadsworth Longfellow. The renowned American poet incorporated elements into his poem The Song of Hiawatha from Henry Schoolcraft's accounts of native Dakota lore in Minnesota which included Minnehaha Falls in Longfellow's southern tip. The early reference of Highway 55 as Hiawatha Avenue, along the west border, may have influenced the naming decision when community borders were drawn in the 1960s. Hiawatha Avenue is the main thoroughfare leading north into Downtown Minneapolis and south to the Minneapolis-Saint Paul Airport.

Longfellow is home to the Danish American Center, Minnehaha Academy, Christ Church and the Longfellow House. The area is typically recognized by bungalow style Craftsman homes built in the 1920s. However it also contains the Ray and Kay Price House, designed by the famed Ralph Rapson, and the Frederick Lang House, designed by Herb Fritz. Minnehaha Falls was once a national attraction and still is an important cultural node of the Twin Cities. The neighborhood's central corridor runs along 42nd Avenue South and is home to many businesses including the Riverview Theater, Turtle Bread Company, The Blue Door Pub, and Mother Earth Gardens. Along the northern edge runs the Midtown Greenway trail and the vibrant East Lake business district, which is home to many award winning restaurants including Le Town Talk Diner, Sonora Grill, and The Craftsman. The west border was once an agri-industrial and milling processing center served by the Northern Pacific Railway. Today the grain silos and factories along the length of the highway are set to make way for new residential condos, apartment buildings, and a new greenway connecting Minnehaha Falls and the Midtown Greenway. This area is also anchored by the Minnehaha Mile, a biking street that contains more antique, vintage, retro, and secondhand shops than any other commercial corridor in the state of Minnesota

The city did not acquire land south of Franklin Avenue until 1881 and 1883 with the last half of Longfellow annexed in 1887 from Richfield. The area was largely built from 1906 through the 1920s when streetcar and residential rail became accessible. Also the advent of ready-to-assemble homes such as Sears Catalog Homes made homeownership accessible to the primarily immigrant population of the city who could not afford the carpentry or craftsmanship to build single-family homes (or mansions) of the era. Most of these early homeowners were first and second generation Scandinavians who moved out from Cedar Riverside. Even by 1930, the south area was still a major immigrant hub compared to the southwest area with a high foreign-born or second generation population. 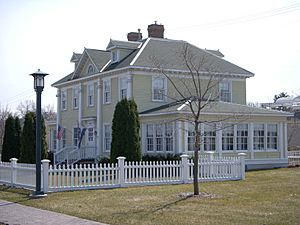 Local businessman Robert F. Jones built his home to resemble a replica of Longfellow's house. Longfellow never lived in it or ever saw it.

Longfellow's popular The Song of Hiawatha spurred national interest in Minnehaha Falls and his name became associated with the area. The poet's name would be further emphasized when the Longfellow House was built in 1906. A local businessman, Robert Fremont "Fish" Jones, commissioned the 2/3 scale replica of Henry Wadsworth Longfellow's original home in Cambridge, Massachusetts. The house was placed as part of the Longfellow Zoological Gardens at 4001 Minnehaha Parkway East, which Jones ran. Jones died in 1934 and the house was deeded to the city. For a short period it was a Minneapolis public library serving the community until it was moved and restored by the Park Board in 1994 to its current location near Minnehaha Falls. It is now an interpretive and information center for the Minneapolis Park System.

Lock and Dam No. 1 is located on the southern edge of the neighborhood and offers a bird's-eye view of the locking procedure and other topics ranging from barge traffic in the transportation network to the Corps 9-foot channel project.

Minnehaha Park is a historic city park on the shores of the Mississippi River that includes picnic areas, trails, sculpture and the 53 foot falls. An old snack shack in the Minnehaha Pavilion is home to the popular Sea Salt Eatery.

Mississippi National River and Recreation Area provides trails for biking and hiking on along the river and provides access to sandy beaches and viewing points.

All content from Kiddle encyclopedia articles (including the article images and facts) can be freely used under Attribution-ShareAlike license, unless stated otherwise. Cite this article:
Longfellow, Minneapolis Facts for Kids. Kiddle Encyclopedia.